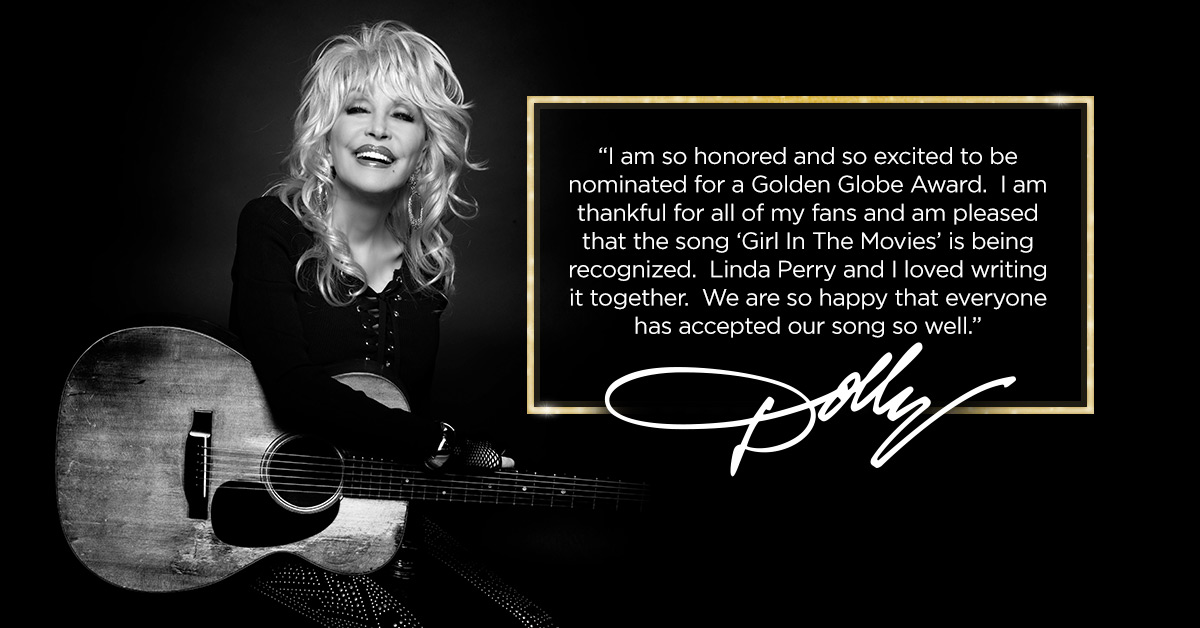 “Because I just love people, little things, and I think people are blind without knowing it sometimes. Sometimes if you can open their eyes, and throw a little light on the darkness that they didn’t even realize they were in the darkness. And hopefully, through music, we can do a lot of that. That’s what I was hoping to do.” Dolly Parton

Dolly Parton has always been intent on building people up. As an actress in 9 To 5, Steel Magnolias and a host of films, her characters show kindness, support and inspire others. As an activist, she launched her Imagination Library in 1995. The program sends over 1 million free books per month to registered children around the world. Children receive a book a month from birth to age five and today the program has sent over 100 million free books. In 2016, she organized and hosted the Smoky Mountain Rise telethon to benefit the My People Fund, created when fires destroyed the area where she grew up.

But Dolly Parton’s real power lies in the moving songs she writes about growing up in Appalachia, coming into her own as a dreamer, owning her strength, smarts and sensuality as a flesh and blood woman. Those songs – and her distinctive looks – have taken her around the world and made her a beloved global superstar.

It makes sense that when Julie Murphy published Dumplin’, the YA novel about a plus-size teen with a former beauty queen mother who finds confidence through the songs of Dolly Parton, it became a No. 1 New York Times best-seller. Parton, an avid reader, was delighted to see her songs imbuing self-worth in someone else’s story, but even with her production company, she never considered taking it to the silver screen.

Enter superstar Jennifer Aniston, who not only optioned, then signed on to produce and star as the Mom, but tapped Patti Cake$ breakout star Danielle Macdonald for the starring role. Knowing Parton’s tremendous humility, they realized her role would be more unseen – and Aniston approached her to contribute a title theme and perhaps re-record a few of her classics.

And that’s when the magic happened.

Music supervisor Buck Damon enlisted Linda Perry, the musically aggressive former 4 NonBlondes frontwoman and producer. He couldn’t have picked someone less like the Appalachian-born superstar. Perry, who’d first met Parton after an appearance on The Talk, had been talking to her manager about trying to do some tracks. Suddenly, her intentions had manifested.

“When we met to work on a song for the movie, well, we just started writing one song after another,” Parton recalls. “And they were good! We were just so excited, we started recording them. We didn’t even know if all these were going to go into the movie; but (the producers) started loving all this music. Before you know it, they’ve got this whole soundtrack!”

“My goal,” explains Perry, “was not to go Nashville, but not go alt-rock, either. I wanted to get players with great feel, then put them together in a room. We’d go through things; I’d have a guitar, and we’d bounce ideas back and forth…

“We’re the same. Our work ethics are insane, and we’d both be like, ‘Are you good? I’m good,’ and we’d stay all night working. That’s how this soundtrack ended up as a body of work that holds together. It blends everything Dolly is.” What a soundtrack it is.

From seven-time Country Music Association Female Vocalist of the Year and two-time Grammy winner Miranda Lambert joining Parton on her very first single, the wry “Dumb Blond,” to a dry old-time vocal into a funk throwdown with Macy Gray and DOROTHY on “Two Doors Down,” the classics are revisited with unbridled, unrepentant joy. There are wafts of Appalachia as 27-time Grammy winner Alison Krauss and International Bluegrass Music Association Entertainer of the Year and seven-time Female Vocalist Rhonda Vincent resurrect “If We Don’t,” and ache on the wide open “Holdin’ On To You” with firebrand rocker Elle King and the stark “Here You Come Again,” featuring 14-year-old Willa Amai.

But it’s the gospel of “Wonder Why,” featuring soul and gospel legend Mavis Staples, that burns.

“Singing with all of these artists was a joy,” Parton enthuses. “I’m honored, and pleased. But singing with Miss Mavis? Knowing what she meant to my soul, how much I loved her before, her Dad and her whole family, back in the day (of the Staples Singers)! Just to be singing with her in the studio, to hear her through my headphones was such a thrill for me!

“I told her, ‘You just be Mavis. You sing whatever you want to sing, dart in on me if you want to. You sing under me, all over me, sing around me! You just sing,’ And it worked!”

As magical as the duets are, though, it’s the solo originals that shine the brightest.

“‘Red Shoes’ is kind of like my modern day ‘Coat of Many Colors,’ because even though they refer to red shoes in the movie, and it’s also in the book,” notes Parton. “I told a story many years ago about how when I was a tiny little kid, and we lived up on the mountain, we had nothing, no electricity or anything. They used to send clothes up, boxes of clothes from the welfare or just for poor people; there was a pair of red high-heeled shoes. I thought they looked little, and I wanted those shoes so bad! I never could get that image out of my head, and I’ve always had red shoes! So when I started to write, I just kind of took that based on Aunt Lucy, and made it my own.”

That same hope and imagination tempered with determination and hard work informs the genreless Parton classic-to-be “Girl in the Movies.” Laughing as much at her own desire to make it, as the empowerment one can find in the movies, Parton offers, “My whole life has been built on positive thinking and dreams, believing that I could do it. So, yes, I’ve been influenced back when I was a kid by (the movies). There’s something about so many of us who’ve gone to the movies. When you’re a kid, you look up at that screen, you see people living their lives with confidence. You feel that.

“I’d see those movie magazines, and I’d want to be that! I wanted to have fancy clothes, and make up. I wanted to be pretty. I was Backwoods Barbie!”

“I’m always amazed by what’s going on now, and that I’m still around,” Parton demurs when confronted by the high-level collaborators she still attracts, “or that a lot of these people kind of look up to me. You worry that you can’t be that good, you can’t be all that. I’m just a regular person, just trying to live my life.

“I want to do good. I want to touch people. I’m not preaching a gospel; I’m not trying to do anything but live my life the way I see fit. If that’s touched people, and is an inspiration, then that makes me feel good. Sometimes you’re better being an example than trying to go fight a battle. My way has always been to address things naturally and honestly, and let it be part of my personality. Just be it.”

That personalizing even songs for others tempers “Push And Pull,” which encapsulates the tension between Aniston and Macdonald, serves the story. But it also captures real life and real family dynamics. As Parton shares, “One of my sisters was going through the same thing with her daughter at the same time. They’d just go back and forth, back and forth. It really inspired me, that one particular emotion of just trying to use your own control to control another person. And it never works!

“But that let me personalize these songs a little bit more than just reflecting the story.”

In many ways, Parton is the universal woman. She understands and nurtures, but she also breaks ground, seeks to press the limits of her own insurmountable talent. After five decades, it’s hard to believe there are new horizons, but the pride of East Tennessee sees vistas ahead. And all of it makes perfect sense.

Considering Gray, the progressive soul songstress, Parton exclaims, “I just love her sound. She was hanging around the sessions, and I got such a kick out of her, because she’s as unusual as a person as she is with her look and her sound. She is a complete… the word is unique, and I love that in a person.

“Like the song with Rhonda and Alison, the bluegrass feel. I wanted a real country, funky track, kind of a June Carter/Johnny Cash kind of track, but with a funky sound. That’s what’s so great about this record.”

“Her voice is insane,” Perry marvels. “The keys haven’t dropped down, and she’s singing all her songs in the original keys. When we decided to do a string arrangement of ‘Jolene,’ Dolly wasn’t so sure. But when she saw the kids come in – because I’d hired a young string section for the song – she was like, ‘Well, do you want me to go sing with them?’ I had the mic set-up, because that was exactly what I wanted.

“She went out there, and we rolled tape. We did it three times, but you’re hearing the first take. But not just the first take, the first take with no punches, no auto-tune, just one complete performance all the way through.”

Sometimes we don’t know what we need until it happens.

“Linda had all these great, great melodies, so we worked really well together. Completely different people. We are so different, yet we’re almost totally alike on the creative level. You know, I’ve never worked with a women before! I’ve never had a female producer. I’ve never really written with anyone, so this was all so different.

“And she’s gay. I’ve never worked that closely with someone on a creative level like that, and it opened up a whole lot of… well, her take on how people don’t accept, all through the years. That’s what this story is, really.”

Parton shines as she says this. It’s not a revelation, just something she’d never considered, and she likes it. “I feel for everybody. I am everybody, all the time. And as I writer, I really get involved in what people go through, whether they’re gay, whether they’re black, or white, or yellow, or brown, or gray. Everybody is who they are, and they should be allowed to be that!

“As a writer, I have to leave my heart open. That’s why I’ve always said I couldn’t harden my heart against hurt, or anything. If you do that, you’re not going to feel all that emotion you need to feel to write what the people are actually feeling. That’s what we need. Listen to what you feel.”

For Dumplin’, her mother, as well as the women who join Parton for these collaborations, feeling is the bottom line to getting where they need to be. It’s not always easy, but it makes the journey – and the listening – worth the effort.