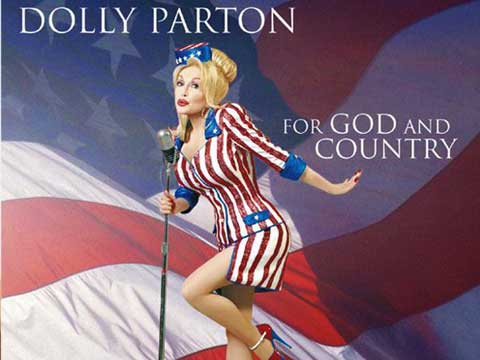 Dolly released her 38th solo album, “For God and Country” on Veterans Day in 2003. The album is a collection of patriotic songs which include famous tunes such as “The Star-Spangled Banner,” Lee Greenwood’s “God Bless the USA,” and “When Johnny Comes Marching Home.” Ten of the songs are written by Dolly and include, “Welcome Home,” “Red, White & Bluegrass,” and “Color Me America.” The album was released on Nov. 11, 2003, on the Welk Music Group label.

In an interview with Country Weekly Dolly said,

“I’m not a bit political, but I’m extremely patriotic.”

The album features a new version of Dolly’s beloved 1977 hit, “Light of a Clear Blue Morning.” The song, “Color Me America” is featured in the patriotic finale at Dolly’s Dixie Stampede Dinner Attraction in Pigeon Forge, Tenn. and Branson, Mo.

“For God and Country” rose to No. 23 on the U.S. Country Albums Charts