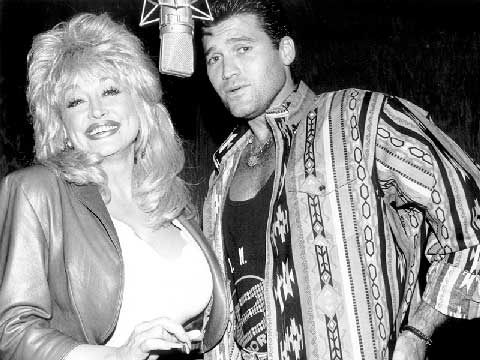 Dolly sang and co-wrote the duet “The Right Time” with her friend Billy Ray Cyrus (and Morris Tancredi) on the 2010 debut album “Brother Clyde,” the name taken after Cyrus’ alternative rock band of the same name. Allmusic.com reviewer Thom Jurek said of the track,

“The Right Time” is the first glance toward country, but only because Dolly Parton co-wrote and appears on it. A roots rocker, she rises to the band’s intensity and helps deliver one of the best cuts here.”

Cyrus really got the most from Dolly in their hard-driving collaboration.

“Dolly, she said she wanted to rock… She came to my studio, brought homemade corn, mashed potatoes and a spread of country cooking. We ate, played guitar for an hour then she just kicked ass. She became like Tina Turner. You could tell she really wanted this.”