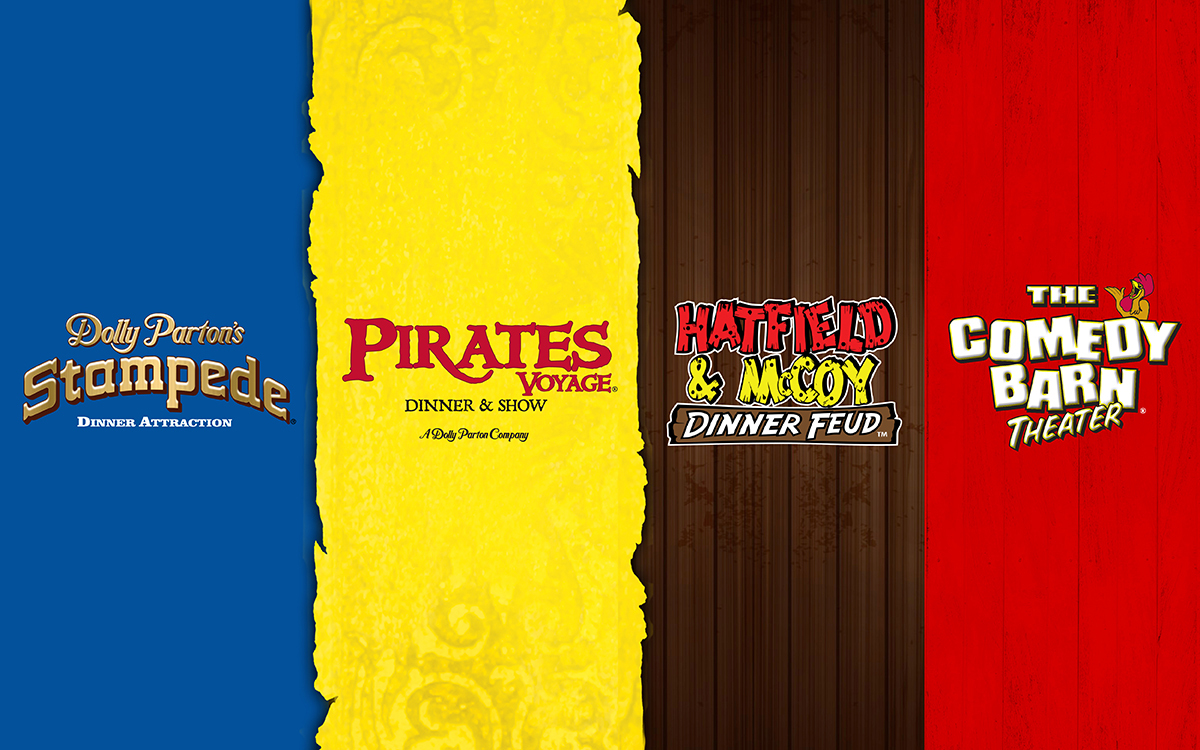 Located in Pigeon Forge, TN, Pirates Voyage Dinner & Show invites you to join the most famous pirate, Blackbeard, and his quartermaster, Calico Jack, as they lead the Crimson and Sapphire crews in a battle on land, on deck, in water and high above full-sized pirate ships in an indoor hideaway lagoon! Be amazed by beautiful mermaids, tropical birds, and much more all while you enjoy a fabulous four-course feast.

Gather your family and become part of the longest-running feud in history and help the Hatfields and McCoys try to settle their differences mountain-style. Whether you’re city-folk or country cuzins, you’ll love the singin’ and dancin’, mighty feats of strength, jaw-dropping stunts and side-splitting comedy at Hatfield & McCoy Dinner Feud. The chaos doesn’t stop with fightin’ cousins! You’ll watch divin’ Hillbillies and divin’ dogs, – in our swimmin’ hole!

It’s the most successful and most attended clean comedy theater in the world! Filled with “clean comedy” for every member of the family, this wholesome show literally is non-stop with a variety of comedic talent and musical entertainment for an evening of family fun and unending laughter. Our comedy variety show is sure to entertain with fun barnyard animals, magicians, jugglers, ventriloquists, comedians, live country and gospel music. It’s a night of a thousand laughs – guaranteed! The Comedy Barn is suited for the entire family and an evening of entertainment sure to get the giggles going.

Bring the family together today and share a special experience that you will always remember. 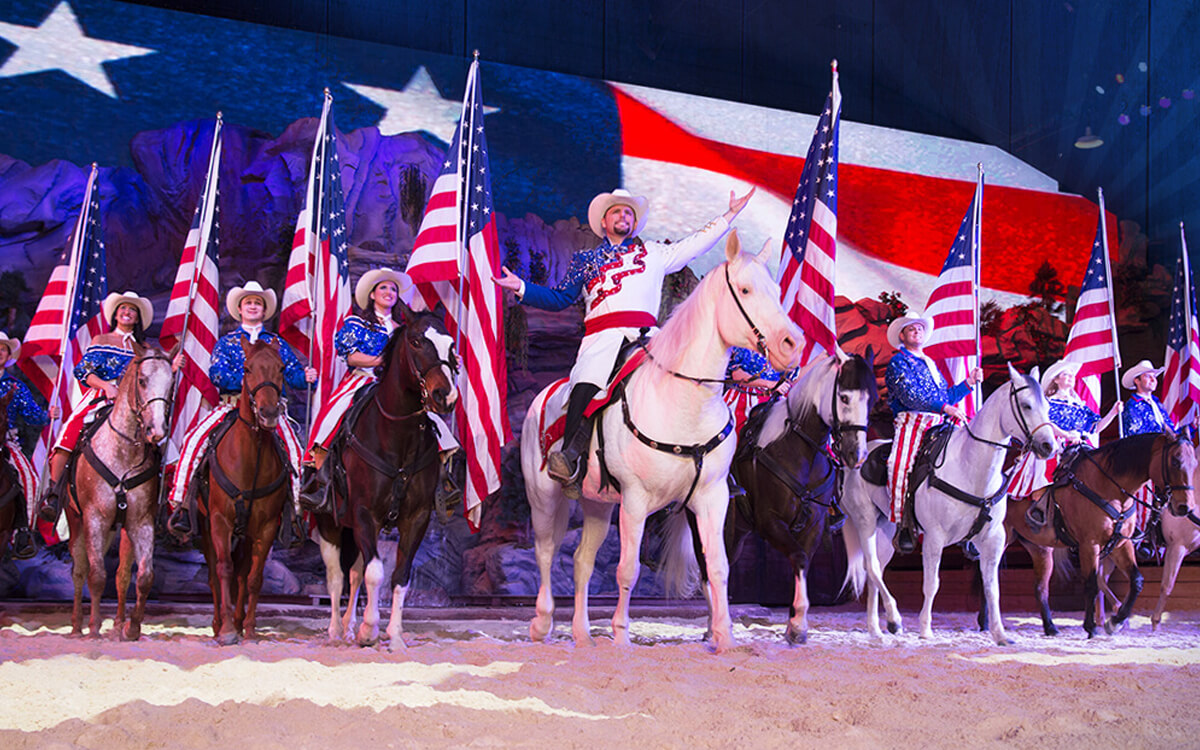 Family memories are among our most treasured possessions – from vacations spent exploring old favorites to new experiences that end up becoming lasting traditions. At Dolly Parton’s Stampede in Branson, MO, we strive to create the perfect experience for family fun and making the perfect memory!

Everyone who visits the Stampede seems to have their own explanation when asked: “what’s the best part of the show?” Dinner is bound to be the answer for many; with a four-course feast that is both plentiful and delicious, this meal is truly one of the show’s biggest stars. The 32 magnificent horses and the talented cast of riders often take #1 on the audience favorite list. From the dazzle of the Roman Ride of Fire to the elegance of “square dancing” on horseback, the equine stars and equestrians bring a wow factor not found in any other show anywhere. There’s also singing and dancing, longhorns and buffaloes, those majestic live animals that once roamed the Great American West. There’s comedy that will make you laugh out loud, some good old-fashioned competition and a patriotic salute including music by everyone’s favorite star, Dolly Parton, that’s a must-see event for families visiting Branson.

Guests should plan to arrive an hour before the main arena spectacular, stroll the beautiful horse walk and meet the 4-legged stars of the show. Then enjoy even more surprises in the Carriage Room. This music and comedy pre-show will have you clapping your hands and tapping your toes to the most fun blend of country and bluegrass music around.

Altogether, Dolly Parton’s Stampede gives your family an experience full of tradition, laughter, amazement and fun that they will cherish a lifetime. 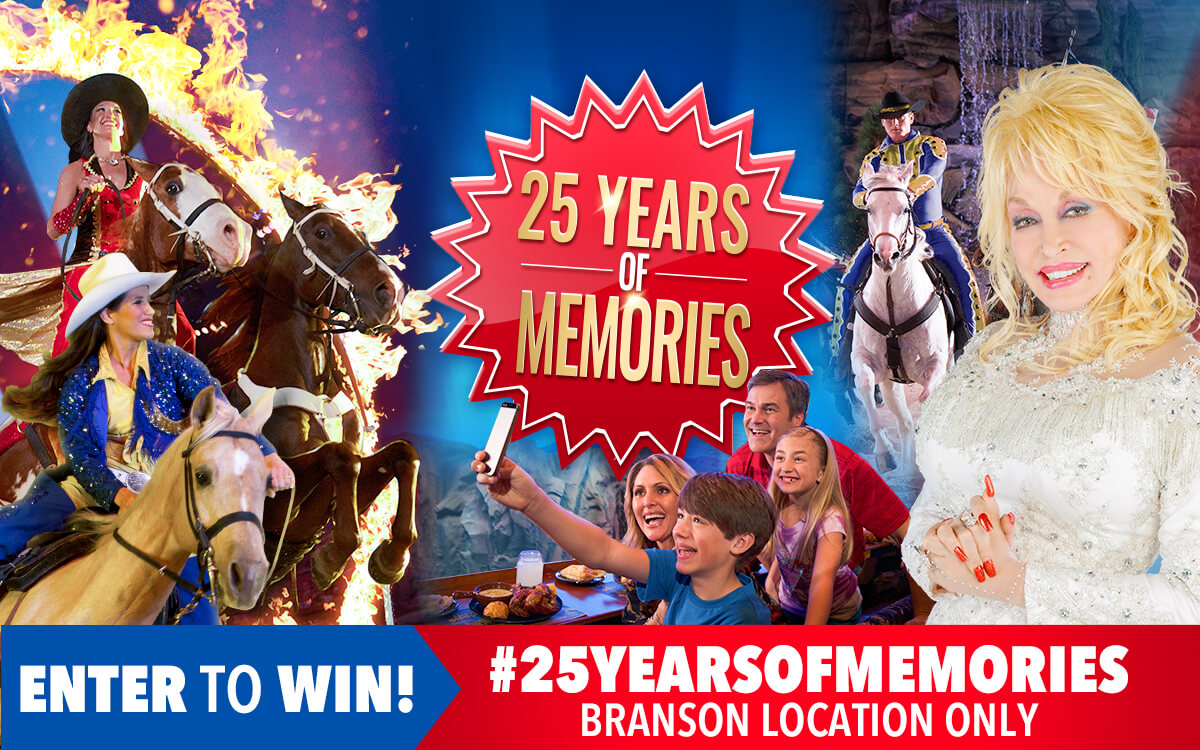 Team DollyFamily Traditions Are Made At Dolly Parton’s Stampede08.14.2019 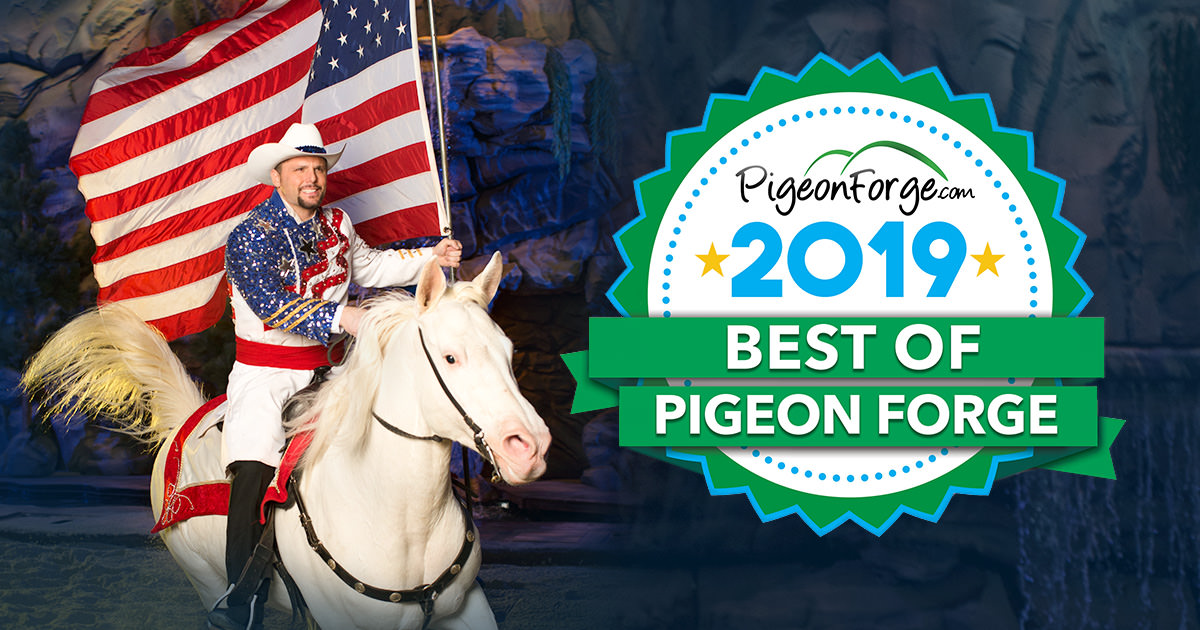 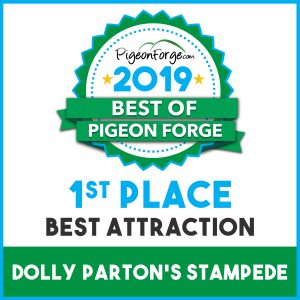 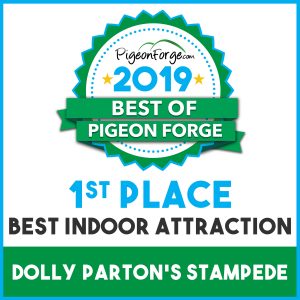 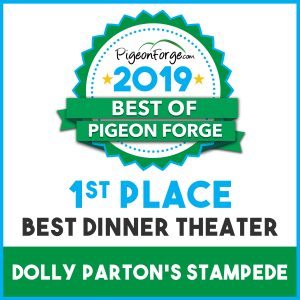 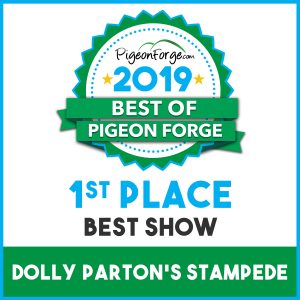 Your visit to Stampede begins with a stroll along our open-air stables! There, you’ll meet the stars of the show up close, and study the flawless lines of the Quarter Horse and Palomino breeds along the Horse Walk.

When you are ready to go inside, our costumed greeters will welcome you into our world-famous Saloon for a toe-tapping good time with our Opening Act, Mountain Ruckus! In addition to refreshments and fantastic music, the Saloon also offers children the chance to become part of Dolly Parton’s Stampede with our make-over experiences! Kids of all ages can become a Buckaroo or Prairie Princess!

After guests have enjoyed the excitement of the pre-show in the Saloon, it’s time for the main event. The award-winning show is filled with friendly North and South competition, thrilling horse riding stunts, spectacular special effects, phenomenal musical productions plus a mouth-watering four-course feast complete with a delicious dessert! 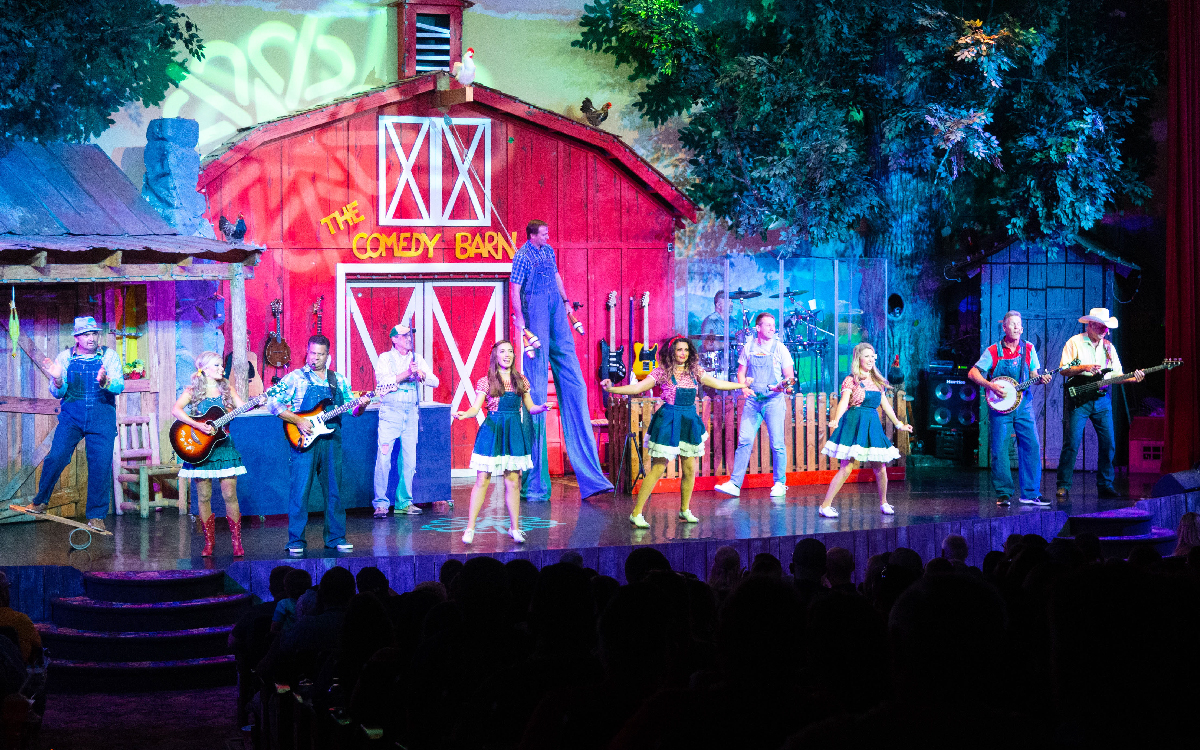 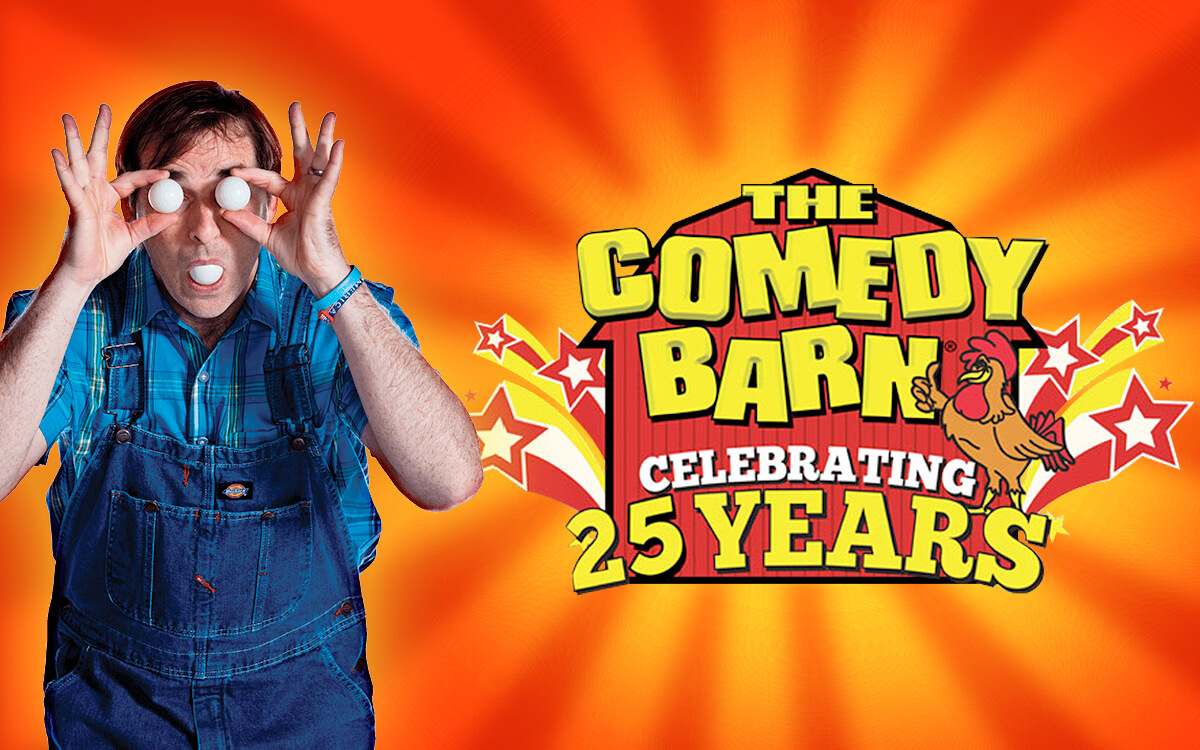