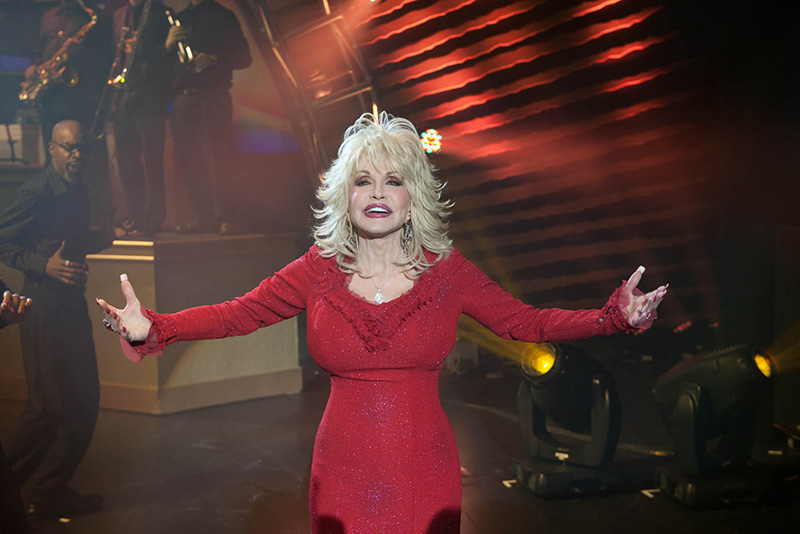 Dolly wrote three songs for the “Joyful Noise Original Motion Picture Soundtrack” including a love song, “From Here to the Moon and Back.”

Dolly’s starring role in the movie “Joyful Noise” (2012) led to her writing three original songs for the soundtrack to the Warner Brothers movie (her first leading role since “Straight Talk” in 1992).

Her three songs (“From Here to the Moon and Back,” “Not Enough,” and “He’s Everything”) were the newest in a list of over 3,000 songs published by Dolly who wrote her first song at the age of five. Dolly once said,

“Ever since I was a little bitty kid, I could just rhyme everything. Every story was a rhyme. It was always fun and it just kind of carried on over the years. I love to write. That’s my favorite thing of all. To me, I’d rather write than to sing. My biggest thrill is to write songs then go in the studio and hear them back.”

The movie features Dolly and Queen Latifah as competing choir members who end up working together to help their church choir win a national choral competition. The soundtrack has sold well over 100,000 copies since its release.

The song “From Here to the Moon and Back” was meaningful as Dolly said her husband, Carl Dean was her muse. “I needed to write a beautiful love song. I picked my husband, who I love, and I thought, ‘Well, I’ll write some beautiful song about him.’ It was about my husband in the movie, played by Kris Kristofferson, so I thought in order to make it really real and really touching, I would write it about my real, true emotions about someone I really do love and have loved for more than half of my life.”

“Not Enough” is about coming together with others to solve problems when things are tough which is the common thread of the film itself.

“I really just felt for myself that [Joyful Noise] was a very uplifting thing for me. It was like good medicine for my own soul, and the fact that it’s to help, hopefully, uplift mankind. But I just think that we should just be praising God a little more than we are, to just glorify Him more.”

The song appeared on the compilation album “The Winning Hand.” The album featured songs by Dolly, Willie, Brenda Lee and Kris Kristofferson from their time at Monument Records.

The single, “Everything’s Beautiful (In Its Own Way)” reached No. 7 on the US Country Singles Charts.