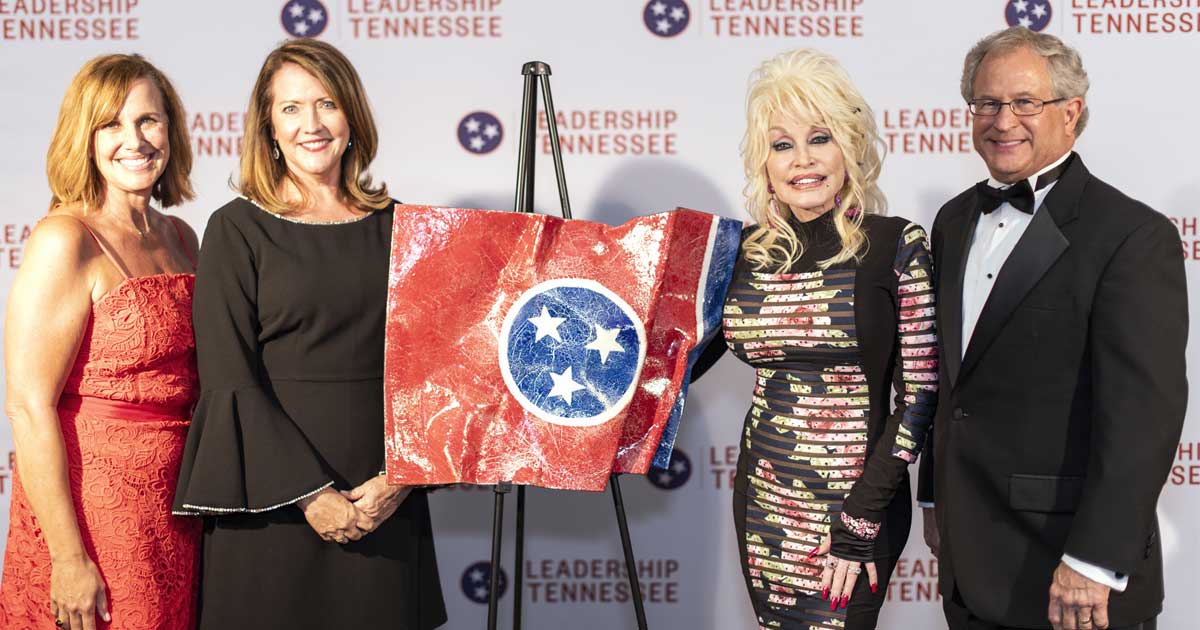 Leadership Tennessee presented Dolly Parton with the first ever Excellence in Leadership Award.

On Saturday, Aug. 11, 2018, at the Country Music Hall of Fame Leadership Tennessee presented living legend Dolly Parton with the first ever Dolly Parton Excellence in Leadership Award for her selfless work to improve lives across Tennessee.

“My dream was to make as many people happy as I could in this life, and I am grateful to Leadership Tennessee and First Lady Crissy Haslam for recognizing our work done to improve the lives of all Tennesseans,” Dolly said. “Even more humbling is for decades to come the future leaders of Tennessee will receive an award with the Parton family name attached to it, and for that I am truly honored and thankful.”

Dolly’s contributions to the Volunteer State are transformational and selfless to generations of Tennesseans. After the devastating Gatlinburg wildfires in 2016, Dolly’s Emmy-winning “Smoky Mountains Rise” telethon raised more than $12.5 million for her My People Fund to provide financial assistance to victims of those fires.

In addition to the joy and comfort her music has brought to millions of fans, Dolly Parton’s Imagination Library mails free, high-quality books to children from birth until they begin school regardless of family income, and since its launch in 1995, more than 100 million books have been mailed to children in five different countries on three different continents.

“Tennessee has many talented sons and daughters but there are few who are as beloved as Dolly Parton,” First Lady Crissy Haslam, chair of the Fifth Anniversary Committee said. “And while she may be most known for her music, she has undoubtedly proved to be an exemplar of leadership through her generosity, humility, inclusiveness, expertise and passion. As a state, we are indebted to all that Dolly has done for Tennessee and its people; there is no one better suited for the very first Excellence in Leadership Award.”

“An integral component of our mission at Leadership Tennessee is network building, and the Volunteer State of Mind initiative brought that collaborative focus to the spirit of volunteerism in Tennessee,” Cate said. “I want to thank all of those who submitted and look forward to watching how the award winners build on this network of ideas and efforts to selflessly serve fellow Tennesseans.”

Sponsored by Eastman and the Eastman Foundation, Volunteer State of Mind was one of several activities and events being held in recognition of Leadership Tennessee’s fifth year. Leadership Tennessee hosted a gubernatorial forum in May as well as events with Pulitzer Prize winning writer Thomas Friedman in February and a summit on childhood poverty in April.

Leadership Tennessee is an organization committed to collaborative, non-partisan dialogue on issues of statewide importance by crossing over geographic and professional boundaries and connecting a diverse network of problem solvers and engaged citizens. A new class of 40 leaders is selected annually to take part in a leadership study course while visiting different areas of Tennessee, learning best practices and analyzing important issues faced by Tennesseans. To date, 170 leaders have gone through the program.