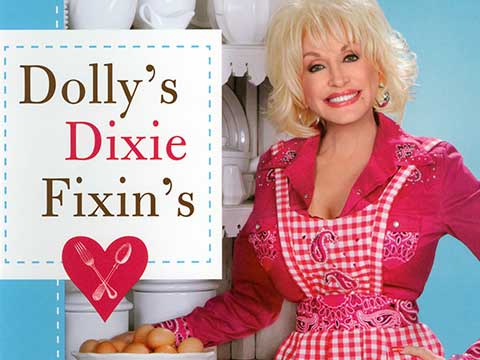 Dolly Parton treated one lucky fan to a “backyard barbeque and bluegrass festival” to coincide with the launch of “Dolly’s Dixie Fixin’s,” her new cookbook to benefit Imagination Library. Dolly’s cookbook is sold exclusively through Dollywood and Dolly Parton’s Dixie Stampede Dinner & Show. She said,

“Since I don’t have any plans to tour this year, it would be difficult for me to perform at Dollywood to benefit the Imagination Library. I have been working on this cookbook for a while, so I thought now would be the perfect time to release it and devote all the proceeds to the Dollywood Foundation.”

“Dolly’s Dixie Fixin’s” features more than 125 recipes, including many from Dolly’s personal collection of southern specialties like her popular banana pudding. Many of the recipes were passed down to Dolly from her late mother, Avie Lee Parton, as well as several from her mother-in-law, “Mama (Ginny) Dean.” The cookbook also includes recipes from Parton’s family entertainment companies, including Dollywood theme park’s Noodlin’ Ned’s Catfish and Dolly Parton’s Dixie Stampede Dinner and Show’s one-of-a-kind cream of vegetable soup. She even includes recipes for dishes inspired by her favorite restaurants discovered during more than 40 years of touring.