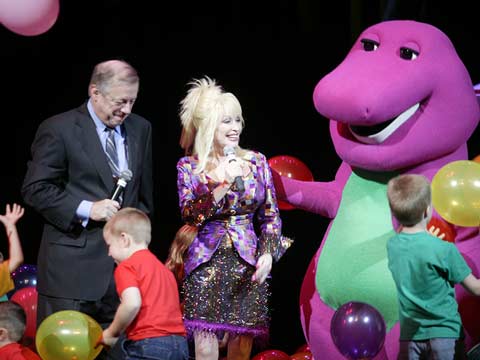 On June 18, 2004, Dolly, Governor Phil Bredesen of Tennessee, Barney, the purple dinosaur, and about 1000 children and parents gathered at Dollywood to celebrate Gov. Bredesen’s pledge to provide Dolly Parton’s Imagination Library program to every child under five across the entire state. For the first time, an entire state guaranteed that every child within its borders will have access to quality books and the joy they inspire.

During this year, many discussions about a statewide Imagination Library took place in several communities and the number of participating Affiliates continued to rise. Books could potentially be mailed to eligible children in all 50 states, and ideally, entire states would replicate the program beyond their current communities. The monthly book ordering process was also vastly improved and social awareness about the program was buzzing.

A new database system was eventually designed, creating a much easier way for Affiliates to add children’s registration information online. The combination of technological improvements as well as the generosity of Dolly herself, Dixie Stampede, Dollywood and all corporate sponsors meant that communities would only continue to pay for just the cost of the actual books and postage.

By the end of 2004, 375 communities in 39 states were providing Imagination Library books to the children in their coverage area. In December, for the first time ever, the number of children receiving books each month surpassed 100,000 and brought the yearly total of books to 980,000.