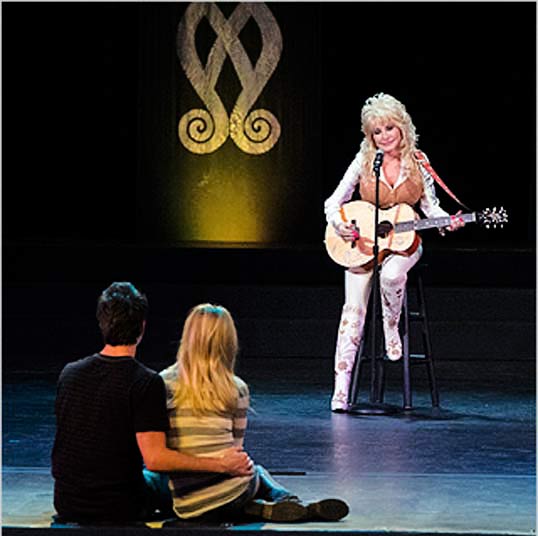 Dolly sang her song “From Here to the Moon and Back” on the May 28, 2012, episode of season eight of “The Bachelorette” on ABC. On the episode, she also lends her theme park Dollywood to the bachelorette, Emily Maynard and her date.

Dolly said of the episode,

“Being a part of ‘The Bachelorette’ at Dollywood and meeting Emily and her date was so fun,” she continued, “I’m just a big ole romantic anyway so we had the best time!”

“One of my favorite moments of my whole life, not just of being the bachelorette, was meeting Dolly Parton. I can’t even put into words how excited I was.”

In addition to her performance of “From Here to the Moon and Back“ (originally from the “Joyful Noise” soundtrack), Dolly also performed a song she wrote especially for the show entitled “Love Will Find a Way.” On the episode, she also has a girl-to-girl talk with Maynard about what she is looking for in a man.