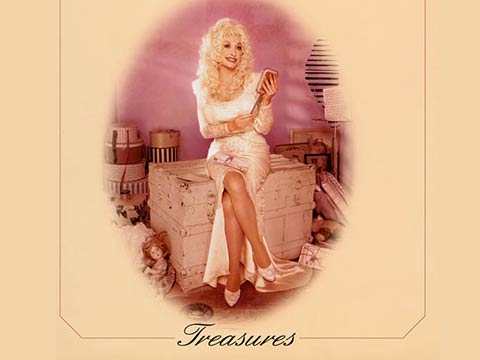 In Sept. 1996, Dolly released her 33rd studio album, ‘Treasures,’ on the Rising Tide/Blue Eye label. ‘Treasures’ features 11 covers of country and rock classics from the 60s, 70s and 80s.

The album includes multiple high-profile guest performances including Ladysmith Black Mambazo, John Popper, Alison Krauss, and David Hidalgo, and was featured in a CBS special on which Dolly performed.

Dolly discussed why she chose to do an album of covers,

“Because it’s something I feel like doing…These are great songs. It’s a good time to do it because chances are, radio is not going to play any new and original things I’m doing. They didn’t play the last two albums.  People are excited about the new record here. And I think it’s a really good album. I think it’s done really well. I just hope my performance is good enough to be played but we’ll just have to see.”

The album spawned a dance remix of Dolly’s version of the Cat Stevens classic “Peace Train” which climbed to the Top 10 on the Billboard Dance Singles chart.