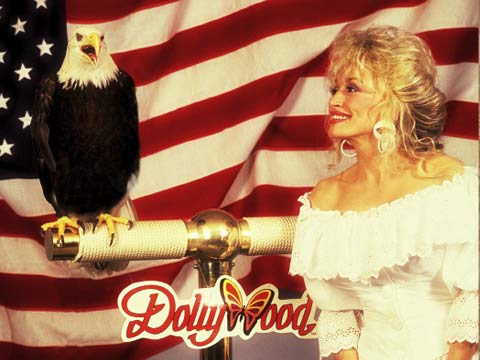 Dolly appeared on July 2, 2003, at the National Zoo to receive the Partnership Award from the U.S. Fish and Wildlife service for her work with the American Eagle Foundation to preserve bald eagles. Deputy Secretary of the Interior Steve Griles presented the award.

The non-profit American Eagle Foundation is headquartered at Dollywood theme park and is a non-governmental leader in the preservation of the American eagles. Dolly spoke about her passion for preserving bald eagles at the ceremony,

“Bald eagles have symbolized our country’s freedom and heritage for more than 220 years… We are excited and proud that Dollywood and the American Eagle Foundation are donating these two majestic birds to the National Zoo and are playing a special role in dedicating this new eagle exhibit celebrating America’s National Wildlife Refuge System.”

In addition to receiving the award, Dolly participated in the opening of the bald eagle refuge exhibit at the Smithsonian National Zoo, the ribbon cutting ceremony, and donated two bald eagles to the exhibit (Sam and Tioga). Secretary of the Interior Gale Norton and National Zoo Director Lucy Spelman were also present.