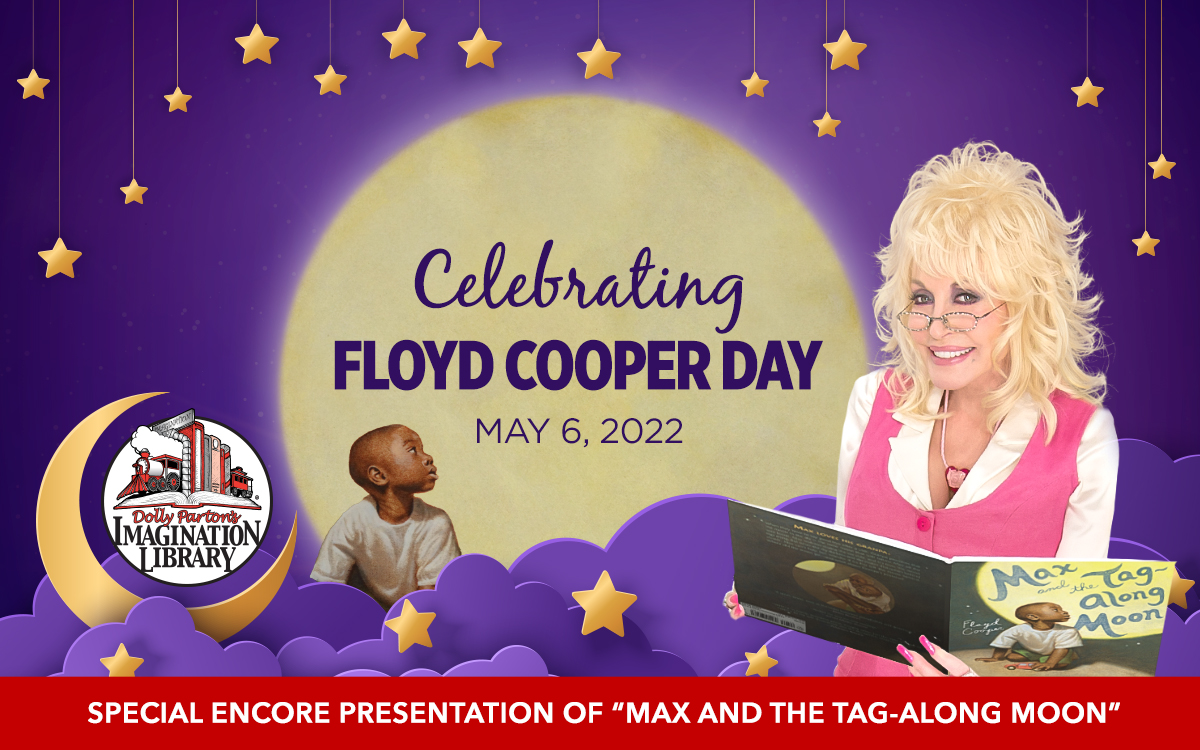 Dolly Parton’s Imagination Library honors the legacy of Floyd Cooper with special re-airing of “Goodnight with Dolly” episode, “Max and the Tag-Along Moon”

Dolly Parton’s Imagination Library joins non-profit organization, Every Child a Reader, in celebrating the first annual Floyd Cooper Day, held May 6, 2022. Happening during the annual Children’s Book Week celebration (May 2-8, 2022), Floyd Cooper Day honors the legacy of the late Floyd Cooper and celebrates his inspiring and powerful work as an award-winning illustrator and author.

On May 6, to mark the first annual Floyd Cooper Day, the Imagination Library will premiere a special encore presentation of the award-winning “Goodnight with Dolly” online series, which will feature Dolly reading Cooper’s “Max and the Tag-Along Moon,” along with a special in-memoriam to Cooper. 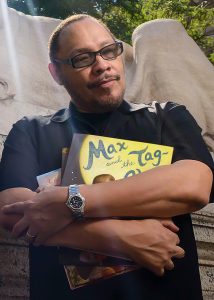 Floyd Cooper was a children’s book illustrator known for realistically and positively exploring the African American experience. With over 30 years of work and 100 titles, he strived to shed light on chapters of African American history that weren’t taught enough in classrooms. “Max and the Tag-Along Moon,” which Cooper wrote and illustrated, has become a beloved book in the Imagination Library cannon and his works have left a lasting impact among families all over the world. Sadly, Cooper passed on July 15, 2021, yet the ideals and values imparted through his works will live on forever.

Watch the Special Presentation of “Max and the Tag-Along Moon”

Tune in to a special encore presentation of “Goodnight with Dolly,” in celebration of Children’s Book Week and the first annual Floyd Cooper Day, on May 6. Watch as Dolly reads Cooper’s “Max and the Tag-Along Moon,” followed by an in-memoriam to honor the life and legacy of Floyd Cooper.

Join the celebration of the first annual Floyd Cooper Day on May 6, 2022, by using #FloydCooperDay across social media, and tune in to the special presentation of “Max and the Tag-Along Moon.” 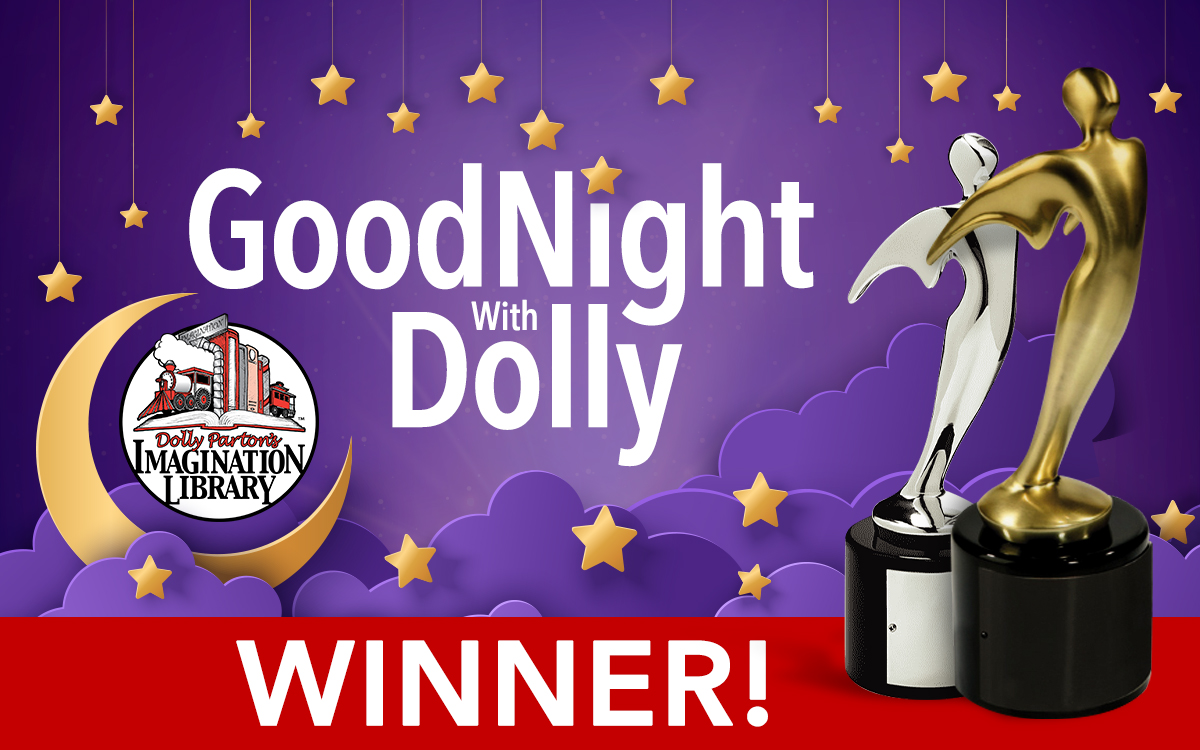 Thanks to the efforts of all those involved, “Goodnight with Dolly” was recognized in multiple categories by the Telly Awards.

“Goodnight with Dolly” was awarded Gold and Silver in multiple categories at the 42nd Annual Telly Awards. The Telly Awards honor excellence in video and television across all screens, including webseries.

Bringing the “Goodnight with Dolly” to life was exceptionally special, especially during the pandemic. Recognition from the Telly Award honors the great work achieved by all those involved. Dolly said:

“I had so much fun reading bedtime stories. I’m glad for everyone that tuned in to read with me. It sure was a tough year and being able to read to children all over the world, sure made the tough times better. Thanks to everyone involved who made this possible during the height of the covid lockdown.”

Bringing Everyone Together For a Bedtime Story

Last year when everyone was searching for ways to be together while still staying apart, “Goodnight with Dolly” was born through the hard work and dedication of Dolly, Steve Summers, David Dotson, Jacob Timmons and his team at S.D. Professionals, LLC. More than 15 million people tuned in to read a bedtime story with Dolly with each episode featuring an Imagination Library book.

Haven’t watched “Goodnight with Dolly” yet? Or maybe you just want to watch them all again! After all, half the fun of books is rereading your favorite stories. All episodes are still available on Dolly Parton’s Imagination Library website. 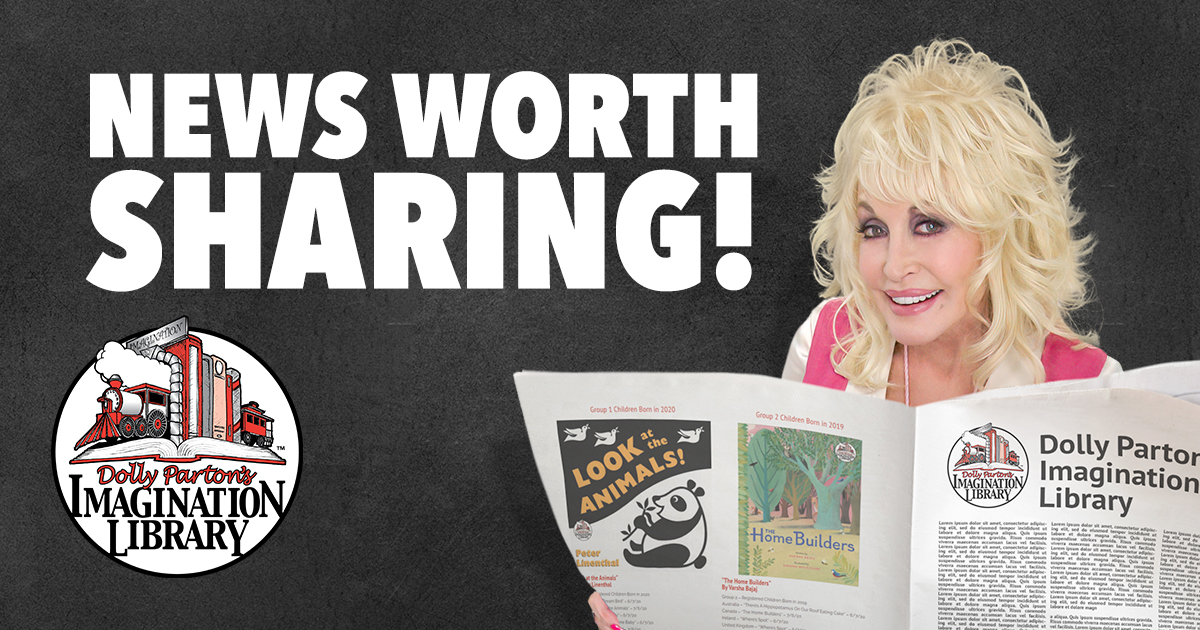 After setting a new enrollment record in March of 2020, the Imagination Library is set to break it in September!

It’s widely known that Dolly Parton launched her Imagination Library in 1995. Inspired by her father’s limited education, Dolly was and is dedicated to sharing a love of reading with children everywhere. So she started a book gifting program which mails a free book to enrolled children each month. Over the years, the Imagination Library has celebrated many milestones including the 100th Millionth Book Dedication at the Library of Congress in 2018.

In 2020, the Imagination Library has already seen one record-breaking month back in March and with totals already counted, that record will be broken in September.

Special thanks to the program’s local affiliates who are made up of dedicated individuals, many who volunteer their time, to help bring free books to the children in their communities.

Parents and guardians of children under 5 years old, who have not yet been enrolled in the program, can visit the Imagination Library to check availability.

During the nationwide shutdown, Dolly spent some time creating an online video series dedicated to children and their families. The series, “Goodnight with Dolly” featured weekly readings of specially selected books from the program. Dolly welcomes the viewers and introduces the title, author and illustrator. Snuggled in bed with her Imagination Library book, Dolly shares stories that are just right for this moment in time. The series is a personal gift from Dolly to all families. Free of charge but not free from obligation as the message will be to pass on the love and keep hope alive because we are all “Together, You and I.”

This exclusive video series is available free of charge online until August 31, 2020.
Watch “Goodnight With Dolly” 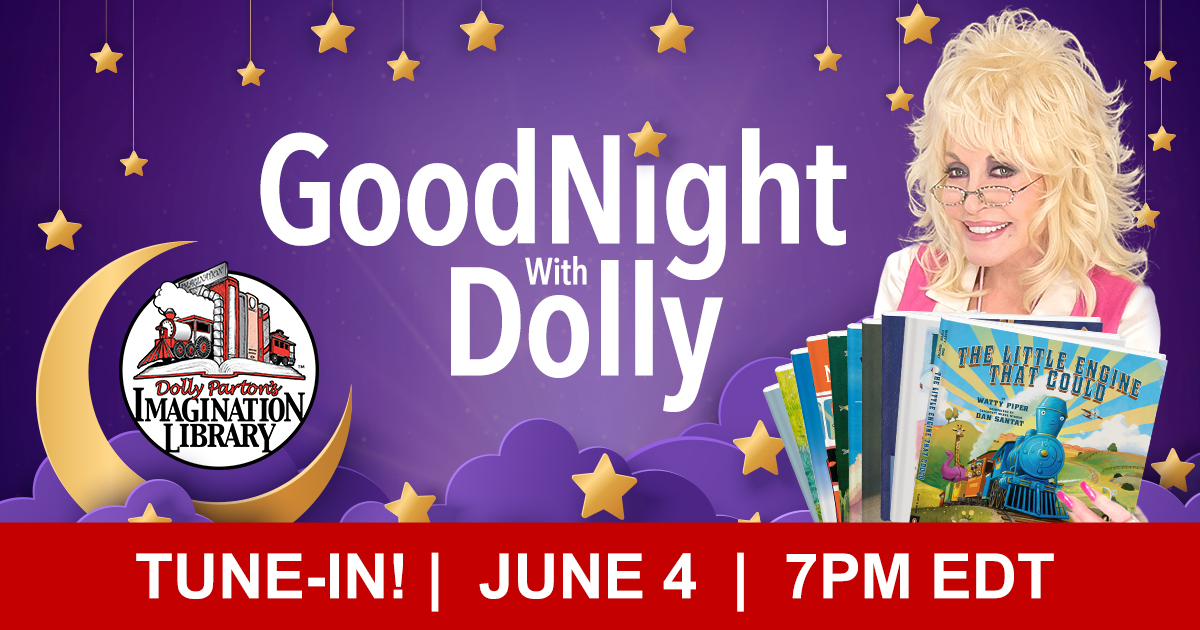 Dolly Parton will close her 10-week bedtime reading series with a special finale episode that includes a tribute to the more than 1700 local organizations that offer her Imagination Library to the children in their community. Since inception in 1995, the Imagination Library through its local affiliates has gifted more than 138 million books to preschool children and is currently gifting books to 1.6 million children around the world each month.

“The local affiliates are the heart and soul of the Imagination Library”, said Parton. “They work hard every day to raise the funds to make sure the books remain free to all of the children enrolled in the program.”

The series began on April 2, 2020 with The Little Engine that Could® and will conclude June 4. The series has been viewed over 15 million times on YouTube, Facebook and other popular social media platforms.

The finale episode features Pass It On written and illustrated by Sophy Henn. This book was specifically selected to end the series because it encourages all children and adults to share their joy, their happiness and their kindness with others.

Dolly Parton said, “I am thrilled this series has meant so much to so many families across the world. I hope our finale episode, ‘Pass It On,’ will be another way for us to transform this moment of hardship into more love and more kindness.”

The finale concludes with the re-release of the trailer for the documentary “The Library That Dolly Built.” The film was scheduled for a nationwide release on April 2, 2020, but was postponed because of the spread of COVID-19. The film will be released in late September of 2020.

THE LIBRARY THAT DOLLY BUILT, directed and produced by journalism professor and director of Land Grant Films Nick Geidner, and narrated by Danica McKellar, goes behind the scenes of Dolly Parton’s literacy-focused non-profit, Imagination Library, to show how one of the most famous and beloved performers in the world has developed an efficient and effective program for spreading the love of reading. Imagination Library started as a gift for the children in Dolly’s hometown, Sevierville, Tennessee, and is now active in all 50 states, and 5 countries, gifting more than 1.6 million free, age-appropriate books to children every month. The film also provides a glimpse of the profound impact the Imagination Library has on the people through original interviews with authors, policymakers, Imagination Library staff, recipients, and the legend herself, Dolly Parton. Woven throughout the film is a biographical sketch of Dolly Parton, featuring rare photos and films from her childhood. Unlike most biographies of Dolly, it doesn’t focus on her music. Instead, it demonstrates that at every point in her career, any time she has had success, Dolly Parton has come back to Sevierville to give back to her people. 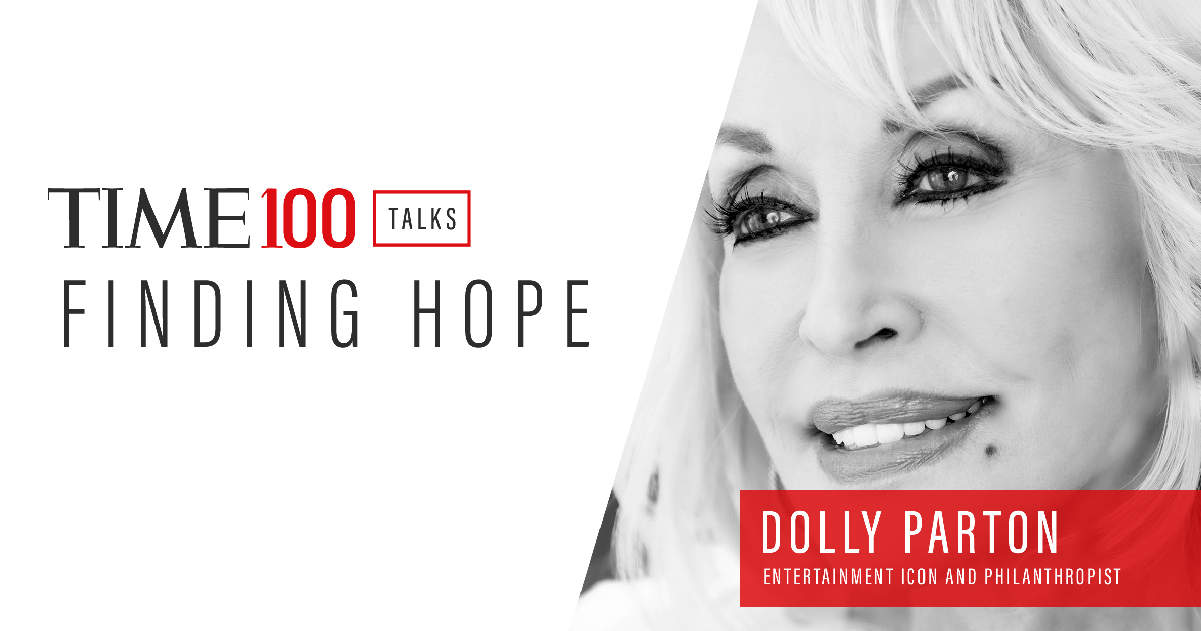 “TIME100 Talks: Finding Hope” hosts Dolly Parton and the exclusive premiere of her new song and music video, “When Life Is Good Again”

Dolly Parton lends her ever-assuring voice during the COVID-19 health crisis with the release of her new song, “When Life Is Good Again” and premiered the official music video exclusively on Time.com. Dolly also joined “TIME100 Talks: Finding Hope” and discussed Dolly Parton’s Imagination Library and her popular “Goodnight with Dolly” YouTube series.

The music video for “When Life Is Good Again” is a heartwarming visual that reminds everyone of all the happy memories and inspires us to look forward past this temporary moment of distance and isolation. Parton also uses the video as a nod to all of the selfless front line workers who are fighting each day to keep us safe. Several of those courageous health workers are featured in the video as a symbol of community and how in times of crisis we come together to support one another.

“Since our world was forever changed by the COVID virus, I have felt a deep respect and appreciation for all of our frontline responders,” says Parton. “This video is to pay respect to them and to remind all of us that this too shall pass. If we pull together as a community, we can rise above and look forward to more beautiful days on the horizon. I hope you love this song as much as I have loved bringing it to you.”

Listen to “When Life Is Good Again”

Dolly joined TIME Editor-In-Chief, Edward Felsenthal, on “TIME100 Talks: Finding Hope” on May 28, and discussed public service and why initiatives like her influential children’s literacy program, Dolly Parton’s Imagination Library, and her current web series, “Goodnight With Dolly,” are so important and close to her heart. At the conclusion of the interview stream, Parton and Felsenthal exclusively premiered the official music video for “When Life Is Good Again.”

The “TIME100 Talks: Finding Hope” series brings together the world’s leading voices to spotlight solutions and encourage action toward a better world. This series will have a special focus on the COVID-19 pandemic. Other luminaries who have been featured in the series include Angelina Jolie, John Legend, among many others.

In addition to speaking on the Imagination Library and their work, Parton also discusses her wildly successful YouTube series, “Goodnight with Dolly,” in which she reads select Imagination Library books, all carefully chosen for this moment in time. The 10-week series kicked-off on April 2nd with a reading of “The Little Engine That Could” and will come to the end of its run on June 4th.