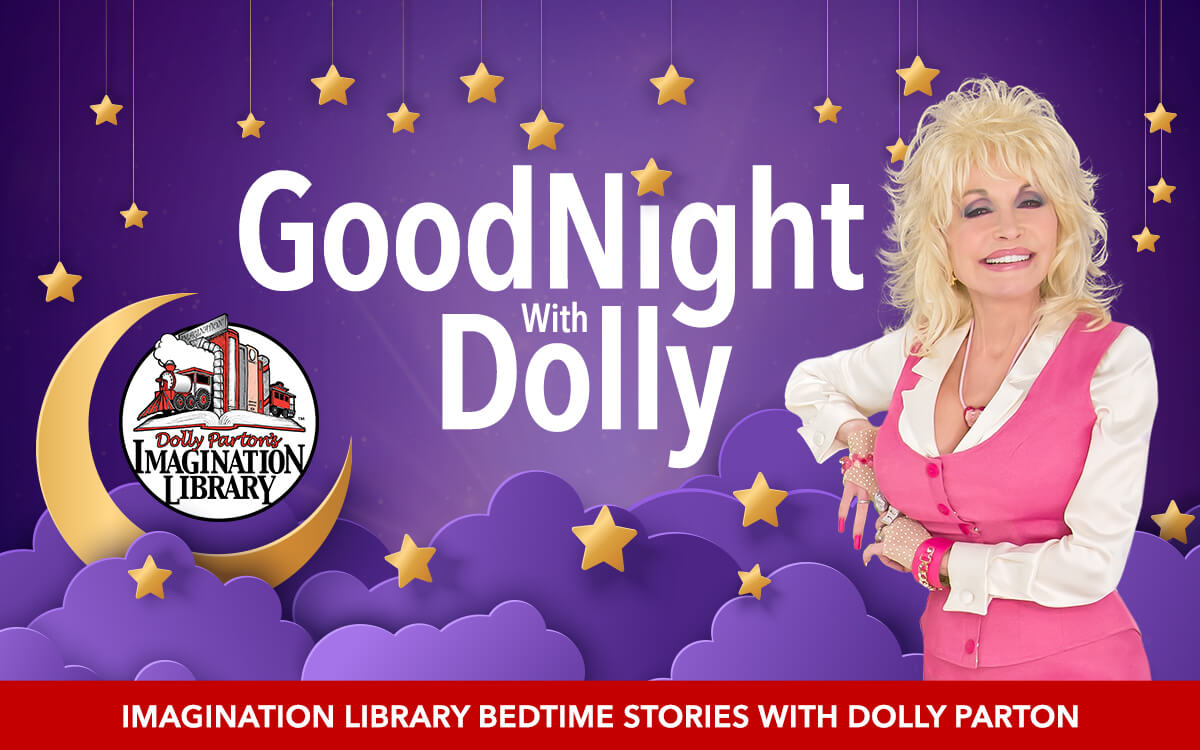 Dolly Parton will read children’s books at bedtime on the Imagination Library official social channels over the next 10 weeks beginning Thursday, April 2 at 7 PM EDT.

Dollywood and Abramorama in association with The Dollywood Foundation announced today that beginning on Thursday, April 2, at 7:00 PM EDT, Dolly Parton will be reading a children’s book for bedtime in a series entitled “Goodnight with Dolly.” Additionally, the documentary about her Imagination Library “The Library That Dolly Built” will open nationally the week of September 21, to commemorate the Library’s 25th anniversary. Since inception in 1995, the Imagination Library has gifted more than 135 million books to children and is currently gifting books to 1.5 million children around the world each month.

“Goodnight with Dolly” will feature Dolly Parton reading a series of Imagination Library books all carefully chosen for their appropriate content at this moment in time. Dolly welcomes the viewers and introduces the title, author and illustrator. Snuggled in bed with her Imagination Library book, Dolly shares stories that are just right for this moment in time. The readings will be a mixture of Dolly and the interior pages of the books. The books will include “There’s a Hole in the Log on the Bottom of the Lake” by Loren Long, “Llama Llama Red Pajama” by Anna Dewdney, “I Am a Rainbow” by Dolly Parton, “Pass It On” by Sophy Henn, “Stand Tall Molly Lou Mellon” by Patty Lovell, “Violet the Pilot” by Steve Breen, “Max & The Tag-Along Moon” by Floyd Cooper, “Last Stop on Market Street” by Matt de la Peña, “Coat of Many Colors” by Dolly Parton, and of course, “The Little Engine That Could” by Watty Piper.

Once a week for 10 weeks at 7:00 PM EDT, The Book Lady will deliver her story with the program available across the Imagination Library, Dolly Parton, World Choice Investments, and Dollywood channels. The read alongs will be a personal gift from Dolly to all families. Free of charge but not free from obligation as the message will be to pass on the love and keep hope alive because we are all Together, You and I.

Dolly Parton said, “This is something I have been wanting to do for quite a while, but the timing never felt quite right. I think it is pretty clear that now is the time to share a story and to share some love. It is an honor for me to share the incredible talent of these authors and illustrators. They make us smile, they make us laugh and they make us think.”

Regarding the film’s release, she adds, “Although it was the right thing to do, postponing the screening of our documentary was a disappointment. So many of our Imagination Library affiliates had organized events around the nationwide screenings, however, things do have a way of working out so the documentary will still have its day.”

“The Little Engine That Could”