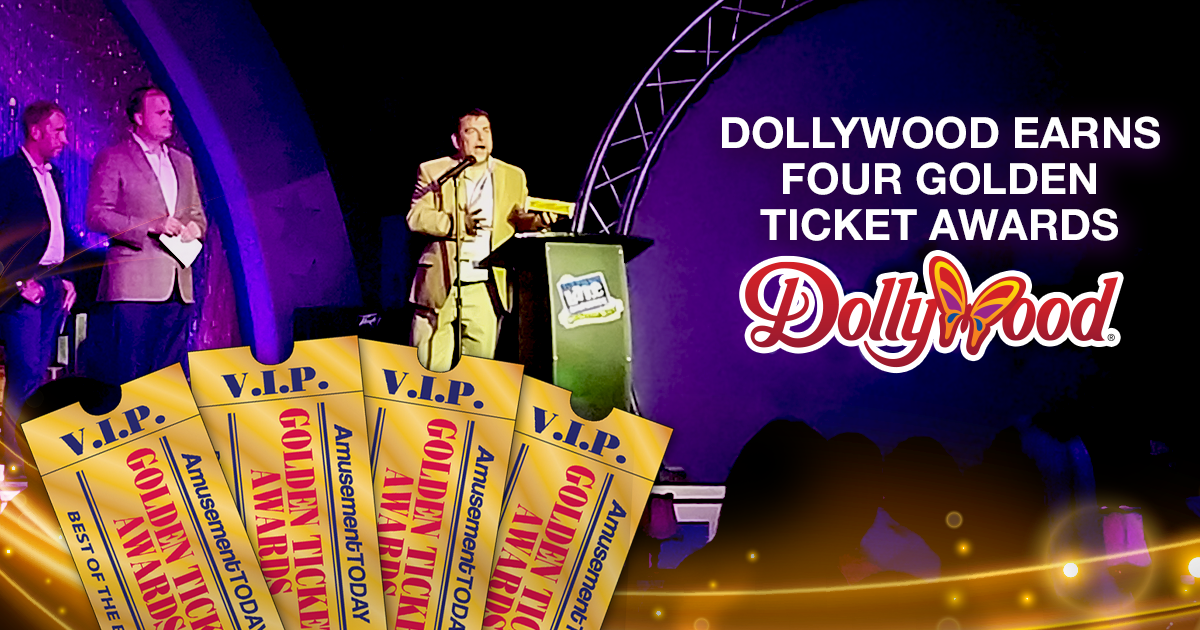 Dollywood continues to illustrate why it is one of the nation’s top theme park destinations, as it earned four top awards during the Golden Ticket Awards virtual ceremony on September 9, announced from the National Roller Coaster Museum & Archives in Plainview, Texas. Dollywood earned finalist placement in nine total categories and won more awards than any other park. No awards were presented in 2020 due to the pandemic.

Dollywood’s Wildwood Grove won Best Kids’ Area for the second time in a row. The park won the award in 2019 after that season’s opening of the expansive new area. One of the park’s stalwart events, Smoky Mountain Christmas presented by Humana, earned its 13th consecutive win for Best Christmas Event, and Dollywood remains undefeated in the Christmas award category.

Due in large part to its idyllic location in the foothills of the Great Smoky Mountains, Dollywood earned the Most Beautiful Park award for the first time this year, after many seasons of finishing in the runner-up position. The award is further validation of Dolly’s original vision for Dollywood and her Tennessee mountain home. Dolly shared,

“As a little girl growing up in the Great Smoky Mountains, I always thought about how this was a place that folks from around the world would love to visit. Ever since we opened Dollywood in 1986, people have told us how special this place is because of the friendly people and the beautiful mountains that God has blessed us with. We make sure to take all that beauty that surrounds us and bring it right down into the middle of the park. We’re truly surrounded—all the way around—by the Smokies! But I’m so proud of what we’ve been able to accomplish here, and these awards show that our guests think we’re doing the right thing. We love the awards, but of course we don’t do what we do just to win awards. We want families to come spend time with us, enjoy one another and hold on to those memories forever.”

The Golden Ticket Awards are the most sought-after awards in the business of amusements and attractions. Calculated from an international poll conducted by Amusement Today, the industry’s leading trade publication, the Golden Ticket Awards are the results of a detailed survey sent to a database of hundreds of experienced and well-traveled amusement park fans, industry journalists and ride manufacturers from around the world. Voters are asked to rate the best in a number of categories, such as best parks, roller coasters, water rides, kids’ area, food and more.

According to Eugene Naughton, President of The Dollywood Company, the guest experience is crucial for any park’s success. He credits both his staff and the support of guests for Dollywood’s second win in the category.

“We are proud of our second consecutive Best Guest Experience award,” Naughton said. “We place a lot of focus on ensuring our guests have the best possible time when they are here. I’ve said it many times, but we have the friendliest employees in the entire industry—we won the Golden Ticket Award for Friendliest Park seven years in-a-row before the award ended. Additionally, both our landscaping and our house and grounds teams do a phenomenal job to ensure the park is clean and that our flowers and landscaping are always green and pristine! Both teams worked exponentially harder to deliver us through a very difficult 2020 season, so this award is a testament to their hard work. Not only are host friendliness and park cleanliness both considered as part of this particular award, but we’re also constantly evaluating our facilities to determine what we can do to provide the best visit for our guests. During this past off-season, our crews undertook a number of construction projects designed to enhance the guest experience. We widened pathways, created new sitting areas for some of our most popular restaurants and completed a number of other projects that kept our guests top-of-mind. We want to take care of all the small things, because those are the items that—many times—become the big things if not attended to and made right.”

Dollywood was also a Top 10 finalist in five additional categories:

“Dollywood continues to demonstrate crowd-pleasing decisions,” said Tim Baldwin, Golden Ticket Awards Communications Coordinator. “From the rides it adds to the entertainment it offers, the park positively charms guests who visit. Being a finalist in nine categories is evidence that Dollywood has grown from a regional destination to a national one, if not global. It is a joy to visit—and for those who know the amusement industry, it’s a treasure.”

The Golden Ticket Awards have become the subject of much discussion by park aficionados the world over and have garnered mentions in such notable media outlets as USA Today and the Chicago Tribune, as well as by the late radio newsman Paul Harvey. The awards were also the topic of a one-hour Travel Channel documentary.