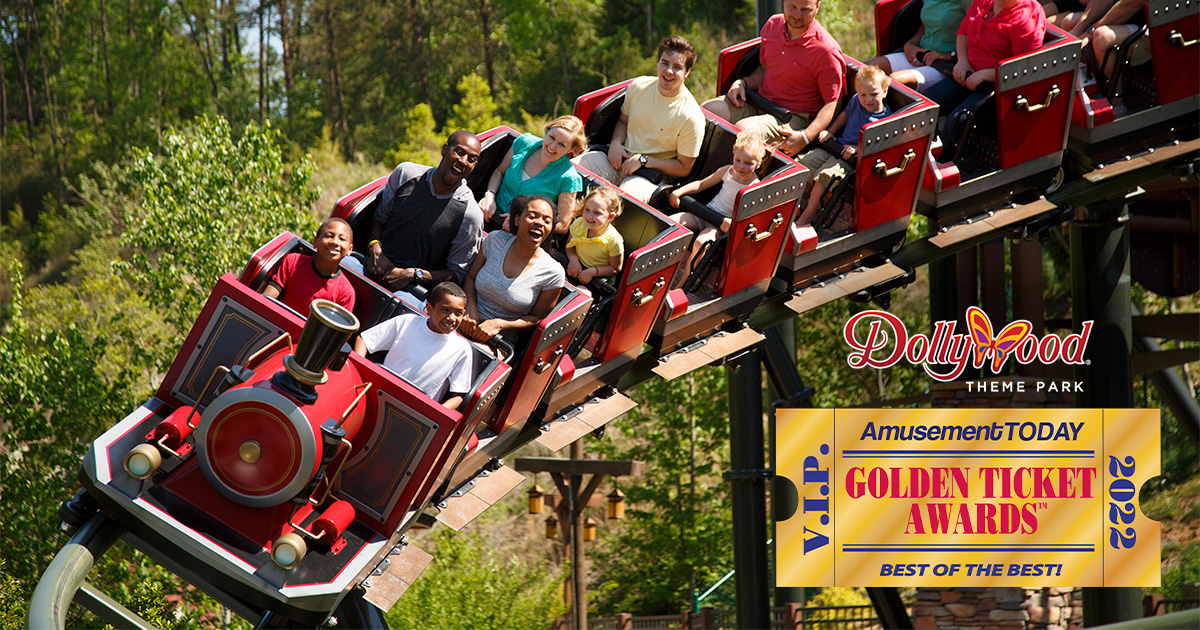 “We don’t do what we do to win awards, but they sure are nice,” Dolly said jokingly. “Seriously though, we’re proud of the recognition we receive because it means we’re doing well at what we want to do—take care of the great folks who come to visit our park year after year. I’ve always known that the Smokies are a very special place, and for the park to be just one reason why so many people come visit this little part of Tennessee warms my heart. To hear that they think so highly of their time at Dollywood really does this Smoky Mountain girl a lot of good.”

Every day, Eugene Naughton, President of The Dollywood Company, places much emphasis on the guest experience and gives credit to Dollywood hosts and park guests for the park’s third win in that category.

“The Golden Tickets award ceremony is one of my favorite events of the year,” Naughton said. “I appreciate Amusement Today for hosting the awards because they serve as a good gauge to help us understand how our guests are feeling about their experience. We’ve really put a lot of focus the last few years into ensuring that when our guests are inside our park, they are having a great time and are busy creating those memories they’re going to cherish for years to come. Our third-consecutive Best Guest Experience award is a tangible representation that the hard work our hosts put into the park really does matter to our guests. We are proud of these awards and they only make us want to work harder to win them again next year.”

Dollywood’s Wildwood Grove also earned its third consecutive award for Best Kids’ Area. The park first won this award in 2019 after that season’s opening of the expansive new area. Dollywood guests should expect this great area to become even better next season, as the recently-announced Big Bear Mountain roller coaster opens in Spring 2023. The new ride, manufactured by Vekoma, is nearly 4,000 ft. long and becomes the longest roller coaster at Dollywood. With three launches, on-board audio, plenty of air time and a number of thrilling moments, a fourth Golden Ticket category win could be in the cards for 2023.

One of the park’s stalwart events, Smoky Mountain Christmas presented by Humana, earned its 14th consecutive win for Best Christmas Event. Dollywood remains undefeated in the Christmas category due to the effort of the park’s hard-working hosts who plan for the iconic event year-round. Dollywood’s Christmas festival is so prevalent that it has been showcased in several movies, including Hallmark’s “Christmas at Dollywood” and the upcoming Dolly Parton’s “Mountain Magic Christmas” which premieres on NBC later this year.

Due in large part to its idyllic location in the foothills of the Great Smoky Mountains, Dollywood earned the runner-up position for Most Beautiful Park, while the park’s creative and talented culinary team took home a second-place finish for Best Food, thanks to their varied and extensive menus of high-quality items. The park also finished second in the Best Park category to Europa-Park in Rust, Germany, making Dollywood the top-placed American entry. Dollywood’s thrilling Thunderhead remained ranked in the Best Wooden Roller Coaster category, finishing as the number 10 wooden coaster in the world.

“When the Golden Ticket Awards were introduced in 1998, Dollywood didn’t even appear on the list,” Baldwin said. “Flash forward two decades later and the park’s decisions are clearly evident. Dollywood appears as a finalist on the charts more than any other park and took home the most wins. The Southern hospitality begins with [Dolly] herself and is carried throughout the many staff members at the property. With the addition of award-winning rides and special themed areas over the past 20 years, Dollywood has not only become a national destination, it has also become an exciting global destination.

“This is what happens when you pay attention to what makes the guests happy. Fantastic food, crowd-pleasing entertainment and a commitment to signature attractions that make a park one-of-a-kind. Dollywood is a treasure.”

Calculated from an international poll conducted by Amusement Today, the industry’s leading trade publication, the Golden Ticket Awards are the results of a detailed survey sent to a database of hundreds of experienced and well-traveled amusement park fans, industry journalists and ride manufacturers around the world in balanced geographical regions. Voters are asked to rate the “best” in a number of categories such as best parks, roller coasters, water rides, food and more.

The Golden Ticket Awards are the most sought-after awards in the business of amusements and attractions. The awards have become the subject of much discussion by park aficionados the world over and have garnered mentions in such notable media outlets as USA Today, the Chicago Tribune and by the late radio newsman Paul Harvey. The awards were also the topic of a one-hour Travel Channel documentary.