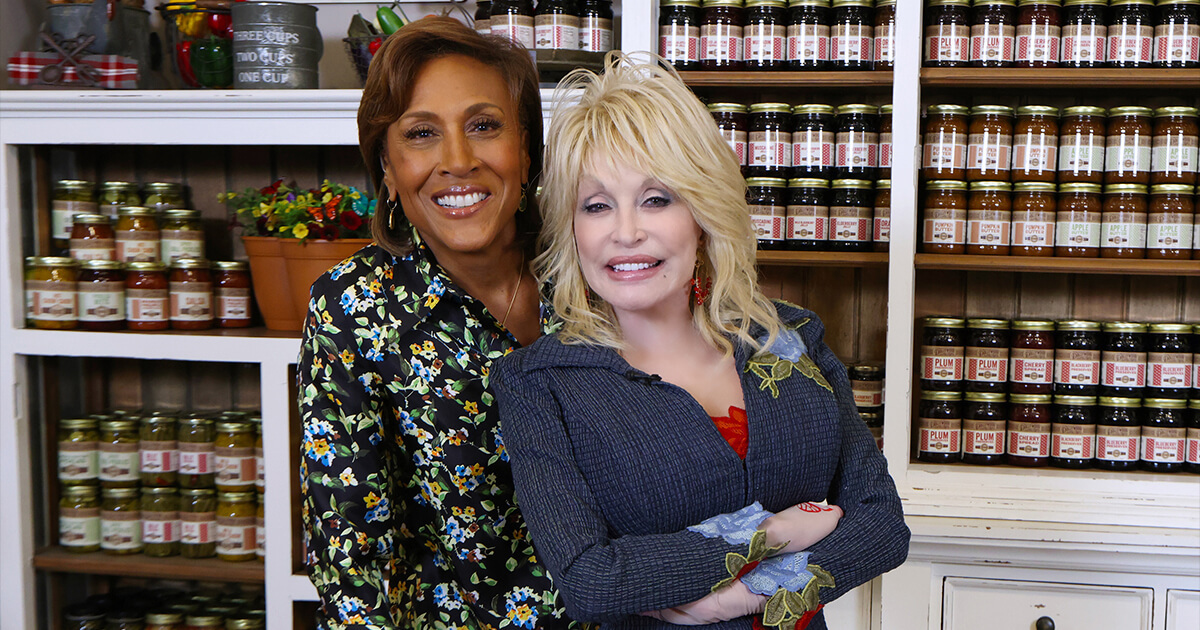 Dolly Parton and Robin Roberts covered several topics during the Good Morning America live broadcast from Dollywood on May 12.

Good Morning America filmed from Dollywood this week. Robin Roberts and Dolly Parton discussed everything from Dollywood’s Flower and Food Festival to the impact of the pandemic and vaccine plus Dolly Parton’s Imagination Library.

The park, like all industries, was shaken with closures during the pandemic; however, Dolly credits her staff, or as she refers to them her family, for making it through the tough times:

“People here are like family, so anytime you have a crisis of any kind, you just kind of pull together and get it done.”

It’s Dollywood’s 36th season, and Robin greeted Johnnie Crawford, a Dollywood employee that has worked at the parks since the beginning. Dolly credits her partners, meaning all the employees, for making Dollywood such a success.

Dollywood’s Culinary Director Aaron Banks joined Dolly and Robin for one of the Good Morning America segments. Aaron taught them how to make the Lavender Honey Mini Funnel Cakes, a featured dish during the festival. He also detailed several of the delicious dishes you can find at the park, including the Barbecue Brisket Sliders with brisket that has been smoked for more than six hours. Dolly commented:

“We cheer him [on] all the time here at Dollywood because he makes sure all the food is great. Everybody loves it. He’s a great boss and has a lot of talent — we’re lucky to have him.”

This marked the first visit for Dolly since last year when the park had to close due to the COVID-19 Pandemic in March 2020. The festival features a depiction of Dolly’s mother quilting the Coat of Many Colors. Dolly was quite emotional upon seeing this in person and knowing how the coat has impacted her life and career, detailing in the interview:

“Just having that big thing there that represents who I am as a person, who my parents were and the kind of mother that I was lucky enough to have and that that little coat has carried me so far. It’s kind of like a little signature thing. My life has been a life of many colors, not just the coat.”

Dolly performed “Coat of Many Colors” during the Good Morning America broadcast.

The Imagination Library is on its way to gifting 200 million books to children. This program was created to help childhood literacy by gifting one book a month to children from birth to age five.

Originally started in Sevier County, TN, the program has since grown globally to include programs in all 50 states as well as the United Kingdom, Republic of Ireland, Australia and Canada. Robin and Dolly discussed the impact this program has brought to little ones worldwide.

Dolly was inspired to create the program because of her father’s inability to read and write. Even though he was brilliant, she saw the struggles this created and wanted to help others avoid them. In the interview Dolly said:

“I’m the Book Lady. My dad took great pride in that. He got to live long enough to see the Imagination Library doing well. He got such a kick out of them calling me the Book Lady.”