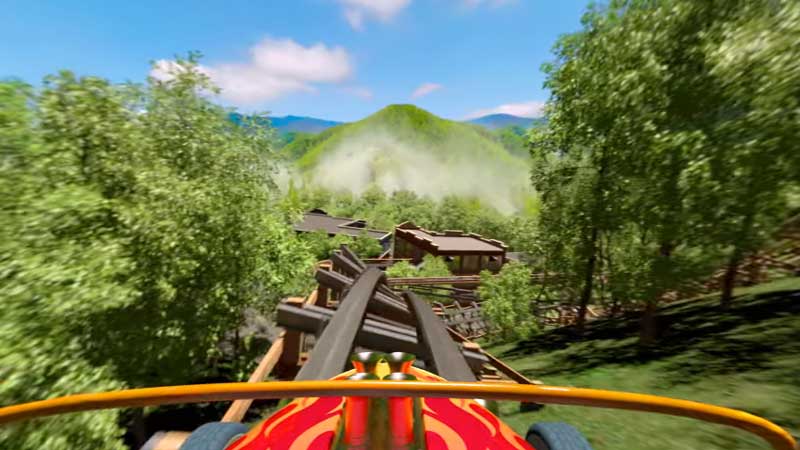 Dollywood is giving coaster fans a chance to jump aboard Lightning Rod, its newest record-breaking offering, before the final pieces of track are even in place! Thanks to Los Angeles-based 3D Live, anyone with a smartphone can stream via YouTube 360 optimized, point-of-view footage of Dollywood’s Lightning Rod and take a virtual ride on the world’s fastest wooden coaster.

The pioneering 3D technology is new to the amusement park industry, and something 3D Live CEO Nathan Huber says will revolutionize the way guests visit a theme park. Huber said,

“This year has been crazy for us. We’re doing a bunch of great new stuff, and we said ‘let’s jump into this world (theme parks).’ This is something fun and we see a huge future of bringing people virtually to theme parks.”

Huber went on to say,

“Imagine hospital patients that may never be able to go to a theme park. Now, this is at least the first step in bringing that experience to them. There is something about creating these immersive experiences; you can take something that would be difficult for them to experience and make it accessible. Now they can sit in their living room, put on a VR headset and be inside the park for a minute.”

The opportunity to work with Dollywood and its innovative new coaster was something Huber said was the perfect fit for his company’s groundbreaking technology. Huber said.

“We love the opportunity to be able to explore and find ways to deliver information to people. We’re excited to continue pushing boundaries.”

Due to working on the footage for Dollywood, Huber already has been able to make several circuits of Lightning Rod—albeit virtually. When asked about his thoughts on the thrilling new ride, Huber was quick to respond saying,

“It is scary. I like scary rides. It looks like it is going to be a ride to freak me out when I get a chance to come to Tennessee to ride it, which is going to be as soon as possible. Watching this ride, I’m just like, ‘wow!’”