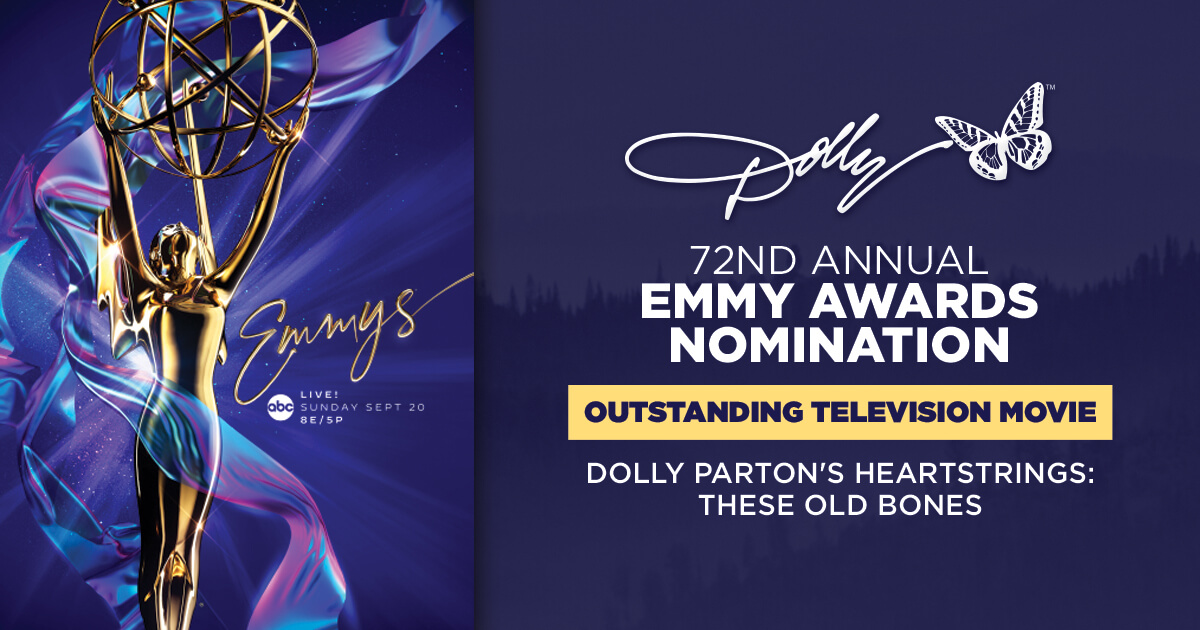 Nominations for the 72nd Emmy® Awards were announced today recognizing a host of groundbreaking new programs and up-and-coming talent, along with beloved performers and hit shows that have been integral in helping television viewers navigate a changing world.

Dolly Parton’s Heartstrings: These Old Bones (Netflix • A Warner Bros. Television Production) is nominated for Outstanding Television Movie. The film stars Kathleen Turner, Ginnifer Goodwin and Kyle Bornheimer. Based on the stories and songs of Dolly Parton and written for television by Jim Strain it is about a mysterious mountain woman who steps into the spotlight as a lawyer struggles to find her voice of seeing, believing and everything between. Dolly said,

“‘These Old Bones’ from Heartstrings is my personal favorite of all of the shows in the series. It’s based on a true character from my childhood. Kathleen Turner did a wonderful job portraying ‘Old Bones.’ Thanks to Ginnifer Goodwin and all of the other wonderful actors who helped bring this story to life. Thanks to the Academy, Netflix, Warner Bros. and especially my partner and executive producer Sam Haskell.

This nomination marks Dolly’s third EMMY® Award nomination. She received her first in 1978 for Outstanding Continuing Or Single Performance By A Supporting Actress In Variety Or Music which she received for her role on ABC’s Cher…Special. In 2017, Dolly Parton’s Christmas Of Many Colors: Circle Of Love (NBC) was nominated for Outstanding Television Movie.

Netflix leads the nominations in totals by platform with 160, setting a record previously held by HBO with 137 nominations in 2019. HBO had the second-most nominations with 107, and rounding out the top five were NBC with 47, ABC with 36 and FX with 33.

The 72nd Emmy® Awards will be hosted by Jimmy Kimmel, who also serves as executive producer for television’s biggest night. Recently announced executive producers for the telecast include Guy Carrington, Reginald Hudlin, David Jammy and Ian Stewart. The show will be broadcast, SUNDAY, SEPT. 20 (8:00-11:00 p.m. EDT/5:00-8:00 p.m. PDT), on ABC. The 2020 Creative Arts Awards will air on FXX on Saturday, September 19 at 8:00 p.m. EDT/PDT.