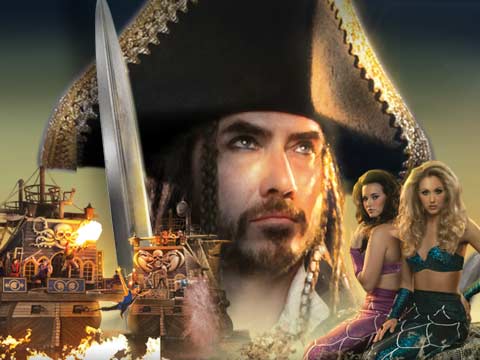 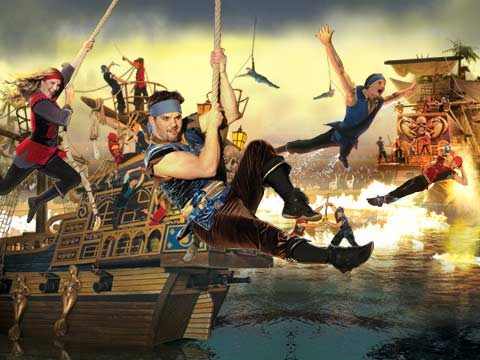 Dolly’s Pirates Voyage Dinner & Show in Myrtle Beach, SC added to the action for its 2014 season. With the introduction of new characters, amplified acts and added action it is a thrill like never before and another reason it is called “The Most Fun Place to Eat” in Myrtle Beach.

In 2014, Dolly’s popular dinner and show introduced Captain Blackbeard, the most famous pirate to ever sail the Caribbean, and his quartermaster Calico Jack to the Pirates Voyage crew. Together, the two lead the Crimson and Sapphire pirates in battle on land, on deck, in water and high above the 15 foot deep indoor hideaway lagoon.

Right from the start, the 2014 season opened with a bang with gun fire, sword fights, explosions and high-flying action, which sets the stage for the adventure to come. Romance flared in a stunning, new aerial act as Captains Doubloon and Scarlett dance high above their ships. Then, in a moving act, the captains mesmerize guests as they meet in the middle of the lagoon and soar on silks with artistry and allure.

Excitement builds with another new acrobatic act featuring the ship mast. Pirate crews climb, slide down and pose on vertical poles as they prepare for their pirate feast.  The skill and bravery of the pirates have you on the edge of your seat. With nets full of treasure, gold coins, fountains of water and thrilling pyrotechnics, Pirates Voyage new finale is like nothing you have seen before.