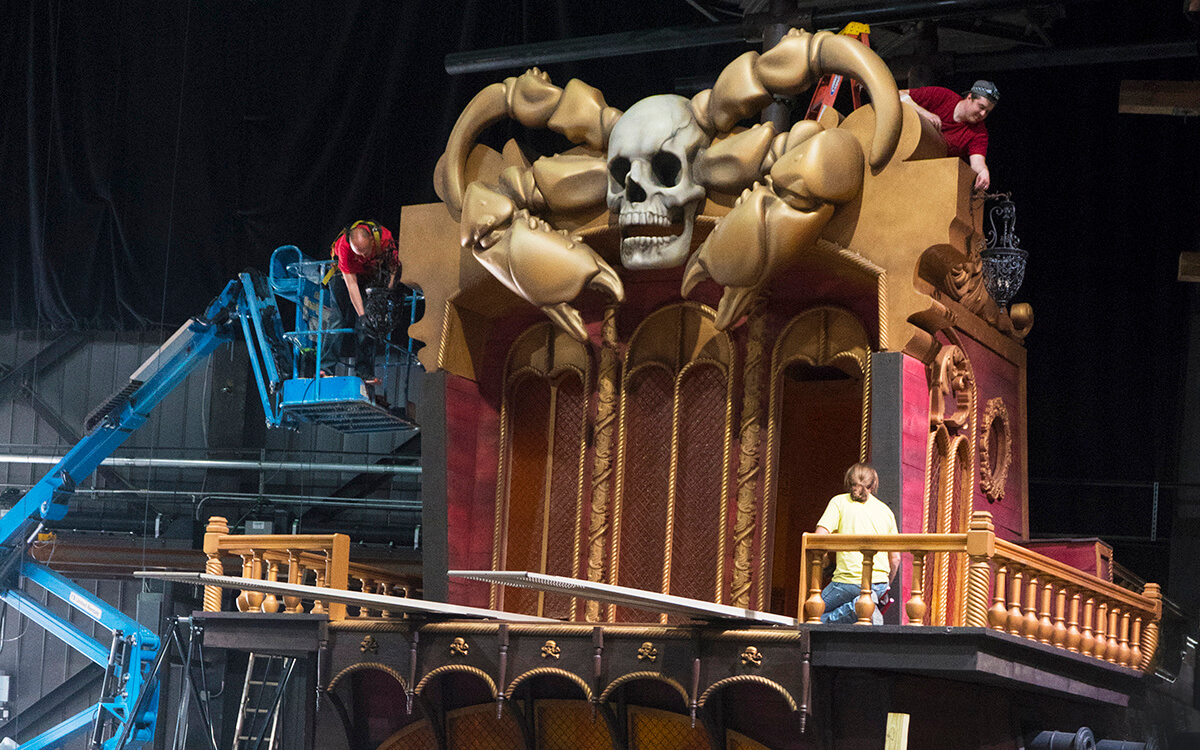 After eight weeks of construction by the creative team, everything is looking ship-shape and making its way to East Tennessee aboard 10 semi trucks. The first truck pulled into “dock” at the entertainment venue on April 2, and parts of the two 28-feet-tall pirate vessels have begun to be assembled as they arrive. The process will continue through most of April. After the enormous ships were designed, they had to be taken apart for shipping, then be reassembled inside the Pirates Voyage facility.

After assembly, each ship will be painted for its role during the dinner show as “home” for the teams of Crimson and Sapphire pirates. The large center platform in the middle of the lagoon is the final large piece of the floating pirate set, where much of the swashbuckling action will take place.

The lagoon from which these two ships will “set sail” also is in the midst of being constructed. The 15-foot-deep lagoon soon has begun to be filled with 300,000 gallons of water. Teams also are setting up the extensive rigging for the multitude of stunts performed throughout the show that will have audience members believing in magical mermaids and amazed by pirate feats. Another 10 trucks are beginning to deliver scenery pieces for the theater’s interior that will play an integral part in the adventurous ambiance of the Pirates Voyage Dinner & Show.

“Our pirate set really is taking shape, and we can begin to see these pirate ships become ready for a family adventure with a dinner and show that will become a favorite for visitors to East Tennessee,” said Corporate Director of Marketing Steve Cruz. “After the set is finalized, we’ll welcome our cast of colorful pirates to begin their practices aboard ship in our lagoon. After extensive training in Myrtle Beach, they are excited to begin practicing the show and all the exciting stunts in this arena where guests will begin to see their performances late next month (in May.)”

Set to be complete in May, the construction phase is a $9 million project, in addition to the initial investment in the property for a total of $28 million.