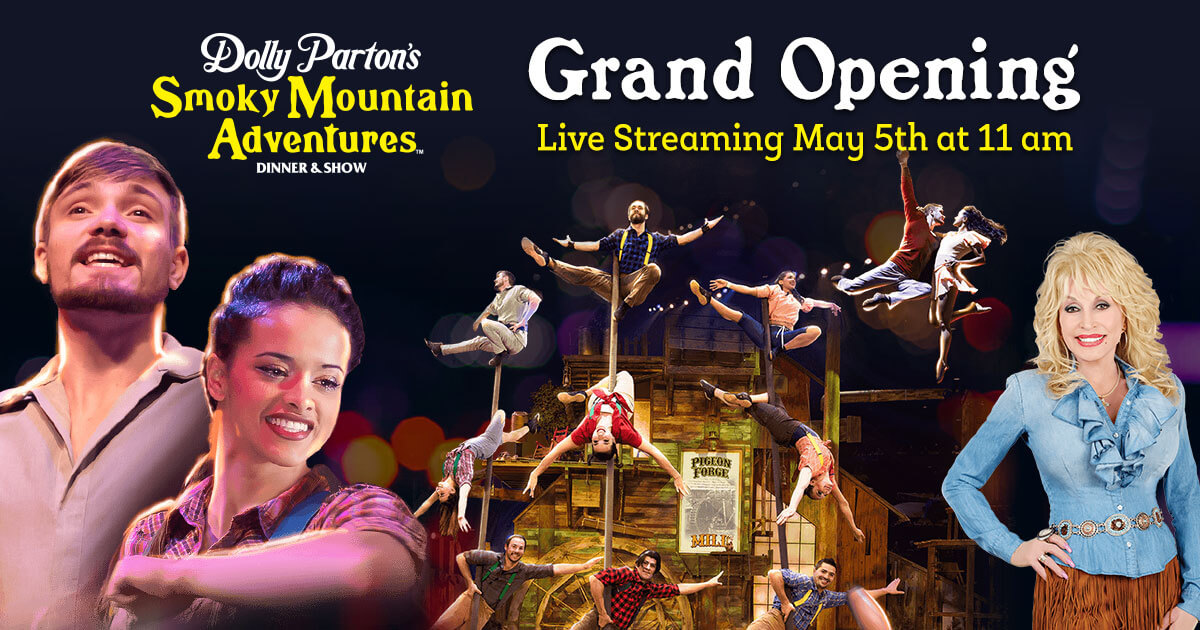 Dolly Parton will welcome guests to a special show at Smoky Mountain Adventures on May 5!

The May 5 Grand Opening show at Smoky Mountain Adventures is part of a special day of exciting activities in Pigeon Forge, TN. Dolly will welcome guests to the all-new show. Portions of the grand opening will be live streamed, starting at 11 AM, on Facebook giving folks a sample of the fantastic new show.

Starting at 6 PM, Dolly will make another appearance as the Grand Marshal of the 32nd Annual Homecoming Parade given in her honor.

In addition to the grand opening of Smoky Mountain Adventures, Dixie Stampede is celebrating their 30th anniversary season in Pigeon Forge. To mark the occasion, these two fantastic dinner attractions are teaming up to offer parade watchers the chance to win Free Combo Tickets to both shows!

Share a photo of yourself from the parade sidelines* to Facebook, Google+, Instagram or Twitter using #DollysDinnerShows for a chance to win a set of two (2) combo tickets to Dolly Parton’s Smoky Mountain Adventures and Dolly Parton’s Dixie Stampede (Pigeon Forge Location Only).

Winners will be chosen and announced during the parade. The parade starts at 6 PM. All winners will be announced between 6 and 8 PM on May 5 from the official social media outlets of Dixie Stampede and Smoky Mountain Adventures.

*You must maintain a safe distance from the parade route. You must remain in accordance with local law enforcement requirements at All Times. NO entries will be considered by anyone who crosses safety boundaries or barricades!