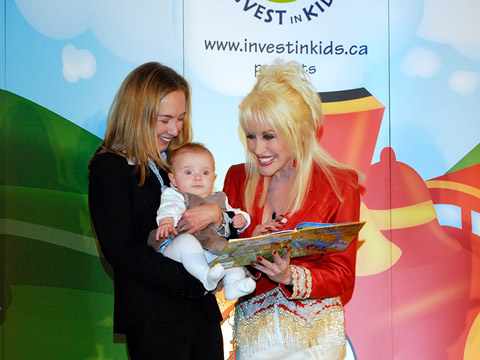 “We are excited to show ‘The Book Lady’ to a Nashville audience. More than half of all the preschool children in Tennessee participate in the program. Plus, there isn’t a more appropriate city to show a documentary about country music’s biggest star!”

While preparing for the debut of “9 to 5: The Musical,” Dolly commented on the short film,

“It captures the heart and soul of the Imagination Library and taught me once again that what we do for children will, in the end, be our legacy.”

Also in 2009, in the United Kingdom, a national television broadcast showed Dolly’s connection between her personal beliefs and commitment to inspire children to dream. In keeping with her love of reading, Dolly wrote “I Am a Rainbow,” and donated all royalties to The Dollywood Foundation.

Soft cover books were also added to the book selection process this same year. The quality of these books did not change, yet the overall cost decreased by 15% – 22% for participating communities.