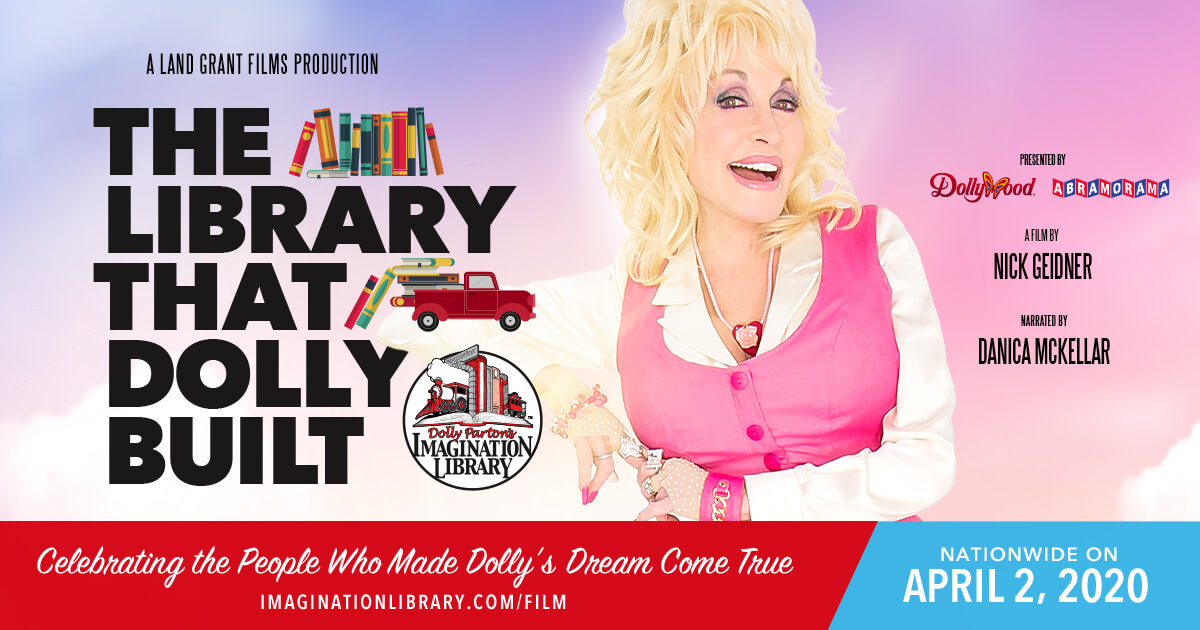 “The Library That Dolly Built” will premier in over 300 theaters nationwide on April 2, 2020, with a special appearance by Dolly in New York.

Released by Dollywood and Abramorama in association with The Dollywood Foundation, “The Library That Dolly Built” is a behind-the-scenes look at Dolly Parton’s Imagination Library. The one-night event will integrate with Imagination Library affiliate partners in multiple communities around the country and is set for screenings in over 300 locations on Thursday, April 2, 2020. In New York City, the film will premiere at the Sillas SVA Theater, hosted by United Way of New York City and featuring an appearance by Dolly Parton.

Dolly Parton said, “I always felt we owed the world a better and deeper understanding of the Imagination Library but the stars never quite aligned. When Nick Geidner came to us with his unique vision and talent, I knew the time had come to make this film. I am a charter member of the Dream More Club so with the help of Abramorama, Dollywood and all of our community partners, we hope to make a big splash in theaters all across the country on April 2. We have come a long way but there is so much left to do!”

The Imagination Library affiliates screening the film on April 2, 2020, will receive 50% of box office proceeds to further their year-round efforts. Timed to the nationwide screening event of “The Library That Dolly Built” and the NYC premiere screening, Sheena Wright, President & CEO United Way of New York City, will be announcing a significant expansion of UWNYC’s ReadNYC: Books from Birth initiative, the affiliate initiative for Imagination Library efforts in New York City.

“The Library That Dolly Built,” directed and produced by journalism professor and director of Land Grant Films Nick Geidner, and narrated by Danica McKellar, goes behind the scenes of Dolly Parton’s literacy-focused non-profit, Imagination Library, to show how one of the most famous and beloved performers in the world has developed an efficient and effective program for spreading the love of reading. Imagination Library started as a gift for the children in Dolly’s hometown, Sevierville, Tennessee, and is now active in all 50 states, and 5 countries, gifting 1.45 million free, age-appropriate books to children every month. The film also provides a glimpse of the profound impact the Imagination Library has on the people through original interviews with authors, policymakers, Imagination Library staff, recipients, and the legend herself, Dolly Parton. Woven throughout the film is a biographical sketch of Dolly Parton, featuring rare photos and films from her childhood. Unlike most biographies of Dolly, it doesn’t focus on her music. Instead, it demonstrates that at every point in her career, any time she has had success, Dolly Parton has come back to Sevierville to give back to her people.

Abramorama commented, “Dolly Parton is an American icon well beyond her musical and acting talents. Her vision to tackle illiteracy with her foundation has improved the lives of millions of children and will continue to do so for years to come. All of us at Abramorama are honored to collaborate with Dollywood, The Dollywood Foundation and Imagination Library to help get the story of Dolly’s literacy program to fans around the world. Amazing as her foundation is, only one person on this planet can say she’s gifted over one-hundred-million books to children…Dolly Parton!”

March is National Reading Month and the Imagination Library will screen an exclusive clip from “The Library That Dolly Built” at the Fourteenth Annual The Power of Women Making a Difference awards luncheon at the Ziegfeld Ballroom on March 4th to further promote the message that reading to children is one of the most important steps to better prepare children for a lifetime of learning.