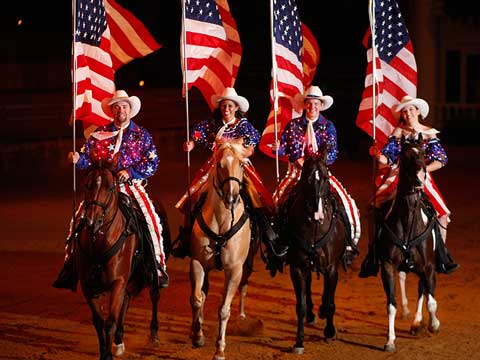 Part musical, part rodeo and Wild West show, Dolly Parton’s Stampede thundered into Pigeon Forge, Tenn., in June of 1988, with a mix of music, food and fun. More than a year earlier, Dolly Parton along with other developers came up with this concept and brought it to fruition.

The original show was called “The Life and Times of Billy Kincaid,” featuring the adventures of a young man from Tennessee who heads West. Along the journey, he encountered Wild West legends, such as Wild Bill Hickok, Chief Sitting Bull and Calamity Jane and took part in raids and shootouts. For guests, it was a one-of-a-kind, Wild West musical comedy.

Dolly invited her guests to choose a side, North or South. While rodeo performers, trick riders, and even audience members competed on the stage, the audience rooted for their side.

The performance was only part of the attraction. The other star of the show would be the feast, which was brought on chuck wagons. Each guest’s meal included a two-pound roasted chicken per person, barbecued ribs, baked potato, corn on the cob and dessert. It was a dinner that would not leave you hungry.