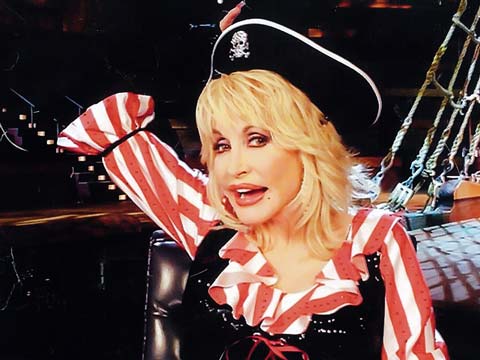 Dolly greets a sold-out crowd on opening day at Pirates Voyage in Myrtle Beach, SC and is honored by the governor

Dolly’s Pirates Voyage in Myrtle Beach, SC opened to a sold-out crowd on, June 23, 2011. Dolly herself was there to welcome the hundreds of guests to her newest attraction. She was greeted by screams as she made her way to the Pirates Village stage.

In addition to members of the community, South Carolina Governor Alan Clemmons was there to welcome Dolly back to the Myrtle Beach area. Before the grand opening, Governor Clemmons presented Dolly with a proclamation from the South Carolina General Assembly naming that Friday as ”Dolly Parton Day” across the state.

In another interview, Dolly told reporters she could remember visiting Myrtle Beach as a child with her family. Dolly also told the crowd, she was very proud of her new show, saying,

“You know me. I’m kind of daring and adventurous, so I decided to change it up a bit.”

Gratefully accepting the honor, Dolly told the crowd that South Carolina was very near and dear to her heart, because her mother was born there and it felt like a second home to her.