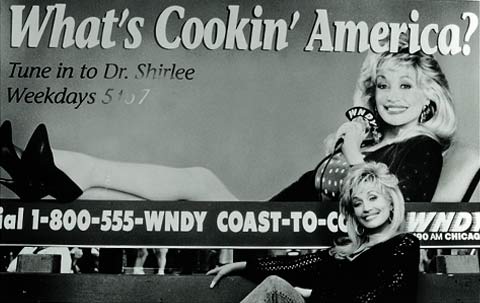 Dolly starred in the 1992 Hollywood Pictures movie “Straight Talk” as Shirlee Kenyon a small town girl who ditches her boyfriend, moves to Chicago, and through wacky hijinks ends up successfully hosting a successful talk radio program. The movie co-starred James Woods and included a cast of other notables such as Spalding Gray, Teri Hatcher, John Sayles and Jerry Orbach.

Dolly contributed 10 original songs to the soundtrack. She wanted to infuse as much of her own personality into the advice given by her character that she went back to her basics,

“We Dollyized it as much as we possibly could… I drug up every old country saying I’d ever heard. I was callin’ up relatives sayin’, `Gimme some of them good old sayins….'”

The movie opened at number four and earned over $20 million.