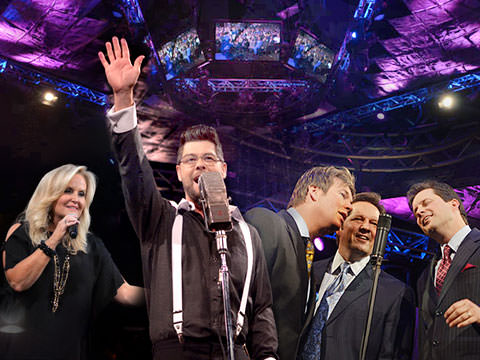 Dolly’s musical roots are gospel. Now, her Dixie Stampede has partnered with the south’s largest gospel music festival—the National Quartet Convention (NQC).  The NQC makes its debut in Pigeon Forge, Tenn., in September of 2014 after many years in Louisville, Ky. Some performers will be featured at Dolly’s Dixie Stampede Dinner Attraction —The Smokies Most Fun Place to Eat!

For two exclusive shows, performers from the National Quartet Convention will perform in Dolly’s 35,000 square foot arena at Dixie Stampede. Then guests will be thrilled with all-new special effects, highlighted with a rousing new overture and video projections which fill the arena with stampeding horses so lifelike the thundering hooves rattle the tables.

During the patriotic finale, which is set to Dolly’s “Color Me America,” the entire arena floor is filled with the image of an American flag blowing in the breeze as a dozen horses and riders proudly present our nation’s colors.